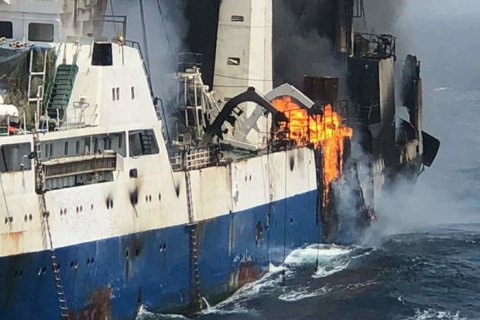 The Ukrainian ocean trawler Ivan Golubets has sunk off the coast of Mauritania after being on fire for two days. When it caught fire, there were 90 people onboard, citizens of Ukraine and Russia.

According to the former Ukrainian presidential representative in Crimea, Borys Babin, two people were reported to be dead.

"According to an update on the tragic fate of the Ukrainian fishing vessel, Ivan Golubets, it sank in the ocean at the depth of 35 m last night. Two fishermen were confirmed dead. The captain of the vessel is a Crimean resident, he had Ukrainian documents during this trip," Babin said on Facebook.

"The incomprehensible manoeuvers of the vessel before the incident, disconnection from the AIS and the strange actions of the crew during the rescue attempts already give experts reasons to assume that there was something interesting in the holds of the ill-fated vessel besides the fish. Something others should not be shown," he suggested.

He recalled that the Ivan Golubets is owned by a Ukrainian state-owned company under the operational control of a Latvian businessman and is flying the flag of Georgia.

The fire began in the engine room yesterday and quickly spread to the deck. Due to heavy smoke, the captain ordered the evacuation.

People were transferred to another trawler, Marshal Krylov.

The Ivan Golubets is one of four ocean trawlers owned by Ukraine.