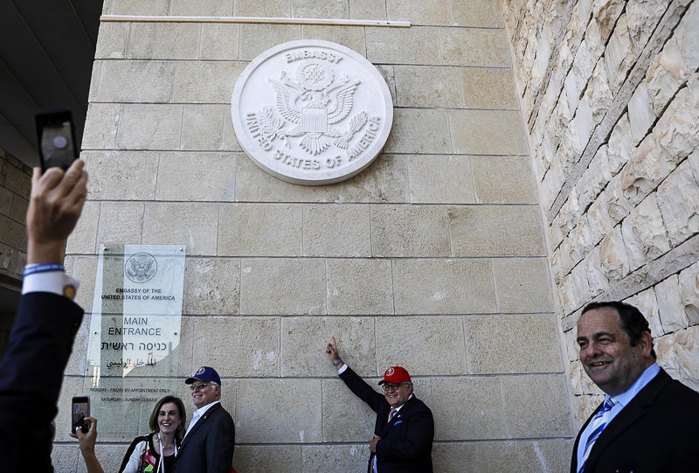 Photo: EPA/UPG
After the opening ceremony of the American Embassy in Jerusalem, 14 May 2018

In Ukraine, the issue of moving the embassy is not new. It first appeared in the public domain on 25 January 2017, when MP Oleksandr Feldman submitted an individual bill on the transfer of the embassy. However, as soon as on 7 March the same year, the bill was returned to him.

Two years later, on 23 May 2019, a similar bill was registered for the second time. But this time document No 10325 was signed by as many as 86 MPs. Among them were Heorhiy Lohvinskyy (author), Boryslav Bereza, Serhiy Kaplin, Nina Yuzhanina, Boryslav Rozenblat, Pavlo Penzenyk, Anton Herashchenko, Oleksiy Honcharenko, Vadym Rabinovych, Maksym Polyakov and others. By the end of the eighth convocation of parliament, the document had not been considered.

However, it appears the bill was submitted as a guideline for the future for new President Volodymyr Zelenskyy whose Jewish roots are a subject for discussion even in the Israeli media.

This is no #AprilFoolsDay joke. #CONGRATULATIONS to #Jewish #comedian Volodymyr Zelensky, top vote-getter in the first round of Ukraine’s presidential election.https://t.co/aWjCpd8xv4 pic.twitter.com/FZi7afZTmQ

And recently the issue of relocating the Ukrainian embassy has been raised again. Last week, during a visit to Kyiv by the Israeli Interior Ministry with a view to signing documents with Ukrainian counterparts, Israeli Interior Minister Aryeh Deri also had a meeting with President Zelenskyy. After this, the Israeli ambassador to Ukraine, Joel León, said on Facebook: "Deri met President Zelenskyy. Among other things, he expressed a request to relocate the embassy to Jerusalem."

Let us try to understand the pros and cons for Ukraine should it decide to relocate its embassy from Tel Aviv to Jerusalem.

Feldman's bill on the relocation of the embassy says: Today, as never before, we need mutual understanding and mutual assistance. This calls for real steps which mark support for the basic values of our peoples. One of them should be the move of the Embassy of Ukraine in the State of Israel to its capital city of Jerusalem."

Feldman recalled the 25th anniversary of diplomatic relations between the sovereign states of Israel and Ukraine, and that more than 200,000 people from Ukraine live in Israel (ethnic Jews and Ukrainians, members of mixed families who are citizens of Israel and live there permanently make up the largest community of immigrants and foreign citizens). And also the annual visits to Jerusalem by thousands of Ukrainian tourists and pilgrims. And the horrible tragedies the two share - the Holocaust and the Holodomor. However, he did not mention that Israel had not recognised the Ukrainian Holodomor as an act of genocide.

The next bill No 10325 brings more specifics, while highlighting the principle of historical justice. The explanatory note states that since 1950 Jerusalem has been the capital of Israel, it is home to the residence of the president of Israel, the Knesset, the Supreme Court, the government, ministries and social and cultural institutions. And that the city of Jerusalem is a sacred centre of Judaism, Christianity and Islam.

The remark that the United States had already officially opened its embassy in the city of Jerusalem was to add weight to the bill.

According to the authors of the bill, the relocation of the embassy should "become a true step to mark support for the basic values of our peoples."

Thus, after Ukraine moves the embassy to Jerusalem, Israel will tell it thank you and give it political support (at least at first). 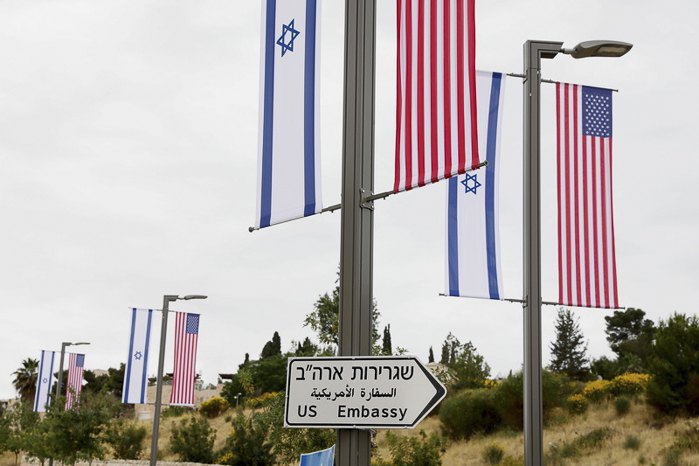 Photo: EPA/UPG
New road sign in Jerusalem, pointing towards the US embassy

The reason why Kyiv has not moved the diplomats to the capital is the non-regulated status of the city of Jerusalem, which is a key problem of the Israeli-Palestinian conflict. Israel considers (entire) Jerusalem to be exclusively its own and indivisible, although its sovereignty over the eastern part of the city is not officially recognised either by the UN or by the majority of the international community. The Palestinians view the city as the capital of their future state of Al-Quds (East Jerusalem), agreeing that the Jewish (western) part of the city will be the capital of Israel in the event of a final settlement.

On 21 December 2017, the UN General Assembly adopted a resolution urging states not to recognise Jerusalem as the capital of Israel. And the move of the US embassy in May 2018 caused mass protests among Palestinian Arabs.

Therefore, if Ukraine finally aligns with one side of the conflict, there will be consequences for our country. Let us see which ones exactly.

First, the relocation of the Ukrainian embassy to Jerusalem will lead to a demarche by at least 54 Muslim countries that are members of the United Nations. Of course, this will lead to bilateral complications with them, including within the framework of the United Nations and other international organisations. These countries have until recently supported all Ukrainian resolutions on occupied Crimea and Donbas.

Also, the international reaction to US President Donald Trump's recognition of Jerusalem as the capital of Jerusalem was largely negative. The UN, the European Commission, the leaders of the United Kingdom, Germany, the Spanish and Czech foreign ministries said it was necessary to resolve the status of Jerusalem through negotiations and within the framework of the principle of "two states for two peoples".

Middle Eastern states also condemned Trump's decision. During an urgent briefing in the UN Security Council on 8 December 2017 regarding the US president's controversial decision, almost all delegations from the member states of the Council of Europe were unanimous in condemning the unilateral US actions to recognise Jerusalem as the capital of Israel. 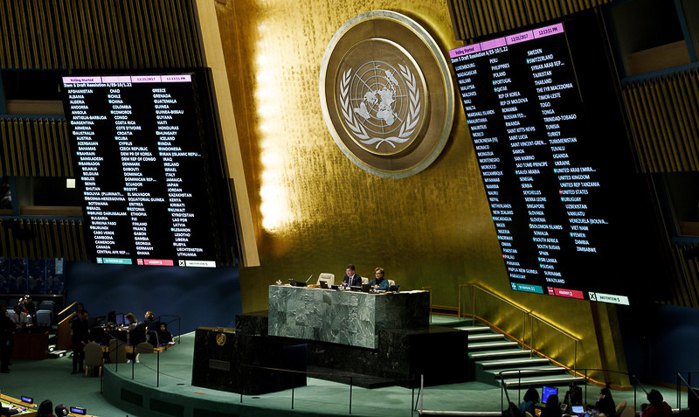 Photo: EPA/UPG
The screens show the results of the vote at a special session of the UN General Assembly condemning recent US decisions regarding the status of Jerusalem, New York, USA, 21 December 2017

Second, Ukraine risks facing a conflict with European countries, first of all, EU member states as no European country has moved its embassy in Jerusalem. It has not happened yet even after the statements of individual EU countries: the statement to this effect by Czech President Miloš Zeman about the need to move the embassy was not supported by the Czech government, which objected to taking the course against the common foreign policy of the EU and resolutions of the UN Security Council.

And in Romania, the president of the country, Klaus Johannis, did not support the Romanian government's initiative, because the Romanian embassy's relocation to Jerusalem would be a violation of international law.

A similar decision in Moldova was not implemented: during the period of dual power in Moldova, Prime Minister Pavel Filip announced his intention to move the Moldovan embassy to Jerusalem. Obviously, such a step was an attempt to secure external support for its Democratic Party from Israel and, with the help of Israeli lobbyists, from the United States. But the next Prime Minister Maia Sandu has already dismissed this intention.

Therefore, making this decision can seriously undermine the implementation of Ukraine's strategic course for European integration.

Third, if Kyiv announces its intention to move the embassy but does not deliver on it (due to numerous financial, security and logistical obstacles), this will lead to a significant deterioration of Ukrainian-Israeli relations. The way it happened, for example, with Paraguay.

In particular, on 21 May 2018, the embassy of Paraguay was officially opened in Jerusalem. But on 5 September the same year, the new government officially announced its intention to return its embassy from Tel Aviv to Jerusalem. This decision was made by newly elected President Mario Abdo Benitez. This decision caused a serious political scandal in Israeli-Paraguayan relations, as a result of which the Israeli ambassador was recalled from Asuncion. 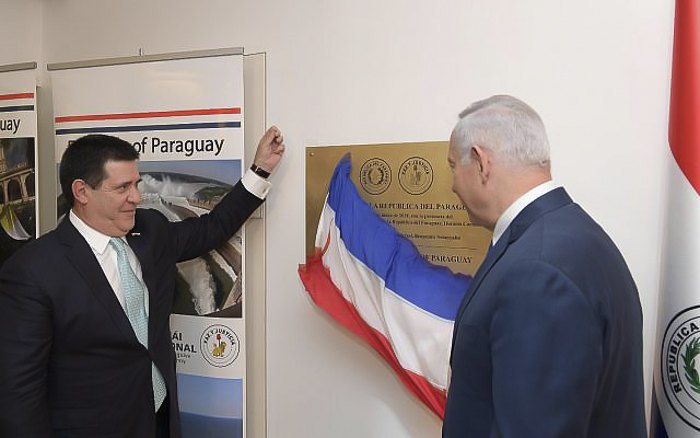 Fourth, the Arab countries are highly likely to tie these actions of the Ukrainian side to the situation with Crimea's occupation by Russia. At the level of international organisations (first of all, at the UN), such actions may be perceived as the de facto recognition of Jerusalem as the capital of the State of Israel by Ukraine. This, in turn, will have dubious consequences for Ukraine's lawsuits against Russia in connection with the annexation of Crimea in international courts.

The relocation of the Ukrainian embassy to Jerusalem will significantly increase the risk of terrorist acts and attacks on diplomats and their families in Israel and the Palestinian Authority, as well as in other Muslim countries.

To minimise such risks, it will be necessary to accommodate the Ukrainian diplomatic staff in a compound and increase the security staff. All of this would put a serious burden on the state budget of Ukraine and limit the capacity of the embassy to implement its functions and tasks.

Also, it is highly likely that this may prompt terrorist acts (including within the so-called "Knife Intifada") against Ukrainian citizens living in Israel, the Palestinian Authority and other Muslim countries (possibly by Muslim extremists in European countries).

It should be recalled that over the past three years about 400 terrorist acts have been committed in Israel, with almost 200 cases of these crimes being committed with the use of cold weapons, in 120 cases involving firearms, and 10 using explosive devices. Most of the above-mentioned cases took place in Jerusalem, as well as in places of compact residence of Israeli Arabs. At the same time, the terrorist threat in Jerusalem has been showing a tendency for increase.

Currently, the Ukrainian embassy in Israel is located in a separate rented six-story house in Tel Aviv. Over the years of lease, it has been equipped with security and fire alarm, numerous surveillance cameras, a separate room for superintendents, modern security and video control systems, which provides significant guarantees of protection from terrorist attacks for the embassy staff.

According to preliminary estimates, the cost of the move itself, including required dismantling / installation of the necessary equipment and other costs, may amount to approximately 150,000 to 200,000 dollars. In case of the move, it may be necessary to buy new furniture (the average age of existing furniture is 12-15 years). It is also necessary to reserve money for repairs a new office may require.

The embassy rents the premises in accordance with the contract. It says that in case of its early termination, the embassy has to pay the entire amount of rent due before the expiration of the contract, which would currently make about $2 million. 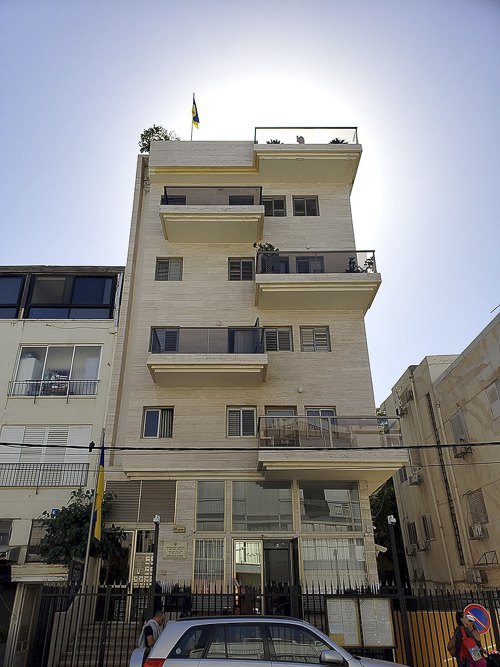 One should not forget that if the lease contracts for diplomats' housing get terminated, they will not be returned their deposits, thus losing around 80,000 dollars.

If the embassy is moved, it will be necessary to relocate their staff and families, which would cost up to 5,000 dollars per family (a total of 80,000 dollars).

In addition, office and housing rents in Jerusalem are on average 20-30% higher than in Tel Aviv. Also, real estate agents' services will be needed to find a new embassy building and housing for the staff, which means extra costs (around 35,000-40,000 dollars).

In addition to the embassy staff in Tel Aviv, there are eight children who attend international or secondary schools for children of repatriates. Given the lack of international schools in Jerusalem (with the exception of a single Catholic school with a limited number of students and specific terms of admission), it may become necessary to drive the children to their schools in Tel Aviv and back, which is about 250 km a day, which will also require extra funding.

In general, according to the Foreign Ministry, the relocation of the Ukrainian embassy from Tel Aviv to Jerusalem will put an additional financial burden of 2.5m dollars on the state budget. However, these calculations do not take into account the additional costs that may arise in the process of moving, accommodating and securing the new embassy building.