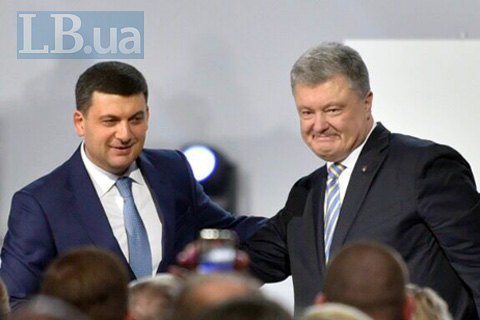 Prime Minister Volodymyr Groysman has told Radio NV that in 2016 he headed the government not as a protege of Petro Poroshenko but as a compromise figure. He added that these three years had been marked by a conflicts with him.

Asked whether he is afraid to repeat the fate of Arseniy Yatsenyuk and his People's Front party, he said: "What happened to the People's Front? The People's Front assumed responsibility in 2014, and Yatsenyuk became the prime minister in very difficult times. He assume responsibility and held the situation tight in 2014-2015. Who made him sink? Then President Petro Poroshenko. Why? In my opinion, [because he saw him] as a young competitor in the next presidential election," Groysman said.

According to him, after his resignation in 2016, Yatsenyuk was supposed to be replaced by either Foreign Minister Pavlo Klimkin or Finance Minister Natalie Jaresko. However, none of them has secured parliament's support.

"I turned out to be the third option, a compromise, because I was the parliament speaker and had normal relations with MPs, and they supported me willingly. I was appointed not because I was propped by someone, but because there was a hopeless situation already," Groysman said.

He argued that the tensions between him and Poroshenko arose as far back as 2015 due to local elections in Vinnytsya. "When there were local elections in 2015, there were two parties in Vinnytsya: Poroshenko's party and Groysman's party. We won this election, and Petro Oleksiyovych felt offended for a very long time. Even our teams were incompatible because we have different principles and approaches. It has always been like this," he said.

"During a certain period, we worked together, it is true. I can say that there are things to thank him for, he assumed responsibility in 2014. He sent a clear signal to his faction to vote in favour of a series of decisions that parliament was to make But I cannot thank him for many things," he said.

Groysman argued that Poroshenko, in particular, has been constantly hindering the implementation of reforms.

"Any change, any reform – it took months to negotiate with him so that he gave a signal to the team to vote. For example, big privatization. I submitted a regulation about English law - he was categorically against it, saying: no, that's wrong, there is the Ukrainian judiciary here," Groysman said.

"We had a rather serious conflict on how to work with business. As prime minister, I did everything for deregulation, I constantly defended business, but all his dogs constantly attacked it. I could not agree with that," he added.

Groysman said that he did not make any scandals. He added that he was making it public now not out of revenge but to prevent a similar situation from repeating in the future.

"This stage is over, I hold no grudge. We have differences, they, I would say, concern morals and values," he said.

In January 2019, Groysman supported Poroshenko's nomination for a second term.