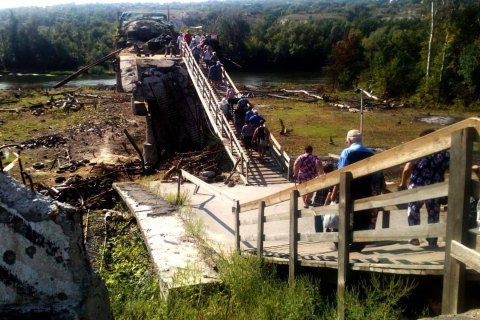 Restoration works at the destroyed section of the bridge in Stanytsya Luhanska did not begin again today due to representatives of Russian paramilitary groups, the Ukrainian Joint Forces Operation HQ has said on Facebook.

On the morning of 5 September, the militants let the Ukrainian side know via OSCE representatives that they did not have an official who could make a decision to carry out preparations for restoring the bridge.

In addition, the militants said that they had no relevant instructions and no detailed construction plan. The OSCE SMM registered this disruption.

“The Ukrainian side, on the other hand, showed the OSCE SMM that it is ready for the planned work to restore the bridge: official inquiries about the organization of work, a working team with machinery and equipment have been made,” the HQ said.

In order not to waste time, the Ukrainian side began preparations to repair the road.