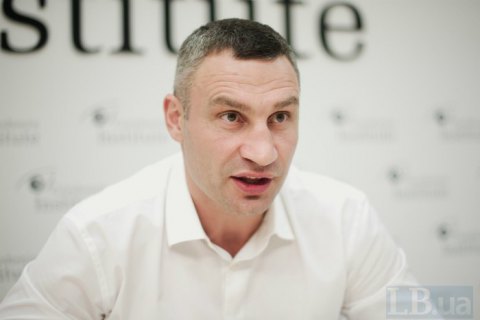 Oleksiy Honcharuk's Cabinet of Ministers at its second meeting on 4 September approved the dismissal of Kyiv mayor Vitaliy Klitschko from the post of chairman of the Kyiv city state administration, MP Oleksiy Honcharenko (European Solidarity) has told journalists.

"The decision has been made, the only explanation is [he is dismissed] in connection with the end of the term in office of the president of Ukraine, that is, the previous one. The decision was approved unanimously, not a single member of the government spoke on this issue or asked questions," he said.

At a briefing after the government meeting, Prime Minister Oleksiy Honcharuk confirmed the news.

“Personally, I deeply respect Mr. Klitschko, he is a great champion and a man who has done a lot for the country. I would gladly dismiss not him but Mr. Stolar, but this person holds no formal post,” Honcharuk said.

According to him, Klitschko needs a strong manager who can resist people like Stolar.

On 24 July, the Cabinet of Ministers received the Presidential Office's request to approve the dismissal of Klitschko. Volodymyr Groysman's cabinet refused to consider this issue and left it to a new government.

Outgoing MPs then asked the Constitutional Court to explain whether the president can appoint someone other than the Kyiv mayor to the post of head of the Kyiv city state administration.

In 2003, the Constitutional Court decided that the Kyiv city state administration simultaneously performs the functions of the executive body of the Kyiv city council and the local executive body and therefore it should only be headed by a person who was elected by the Kiev city chairman.

However, when Viktor Yanukovych became president, the parliamentary majority controlled by his Party of Regions voted in favour of granting him the right to appoint any person at his discretion as head of the Kyiv city state administration, and not the person whom Kyiv residents voted for. As a result, in November 2010, then mayor Leonid Chernovetskyy was replaced by Oleksandr Popov as head of the city administration, and the Party of Regions claimed real power in the city.

In May 2014, Vitaliy Klitschko was elected mayor of Kyiv. Upon taking office, new President Petro Poroshenko immediately appointed him head of the Kyiv city state administration.

Vitaliy Klitschko has described the cabinet’s agreement to dismiss him from the post of head of the Kyiv city state administration as unlawful.

"The government has taken a step towards dual power in the capital, in fact, direct presidential control... What is happening is illegal," Klitschko said at a briefing.

He considers the decision of the Cabinet of Ministers to be unconstitutional and illegal. "Klitschko can be fired by Kyiv residents only!" he stressed.

He noted that he had not yet seen an official government document approving his dismissal.

Klitschko suggested that the next election in the capital may become meaningless if the posts of Kyiv mayor and head of the Kyiv city state administration are separated.

Despite this position, Klitschko plans to take part in them.

“I can live in any country: Germany, the United States. I know what European values and European standards of life are. I spent most of my life there, I know about this not from TV screens, not from newspapers. And I am introducing the same standards in my hometown because I link my future and the future of my children with the city of Kyiv. I will run in the next election because there are many projects, many changes I have to implement," he said.