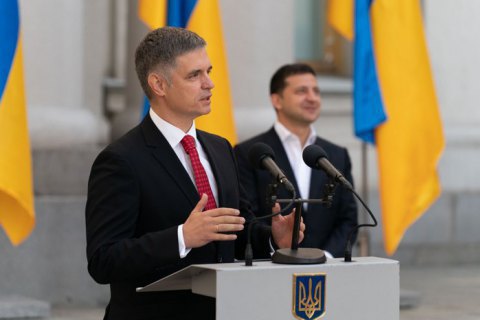 Ukrainian President Volodymyr Zelenskyy and the leaders of Germany and France were prepared to hold a summit of the Normandy Four on 17 September, but Russia could not take part in it for "technical reasons", Ukrainian Foreign Minister Vadym Prystayko has said at a meeting with the parliamentary committees on foreign policy and Ukraine's EU integration.

"President Zelenskyy was ready to meet but this meeting should have been held yesterday. Unfortunately, this time the Russian Federation for technical reasons could not make it, although the French and German delegations were prepared for this meeting," he said.

Prystayko said that he was planning to talk to his German counterpart Heiko Maas to try and reschedule.

The Normandy Four leaders last met in Berlin in autumn 2016.

Upon his election, Zelenskyy pledged to step up negotiations in the Normandy Four format.

According to some reports, Russia said it would join the negotiations only after the trilateral contact group on a Donbas settlement agreed the so-called "Steinmeier's formula" (a special status is granted to Donbas after a democratic election under Ukraine's control is held there).