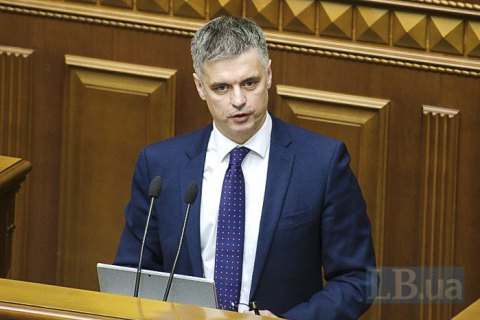 Ukraine has agreed to the so-called "Steinmeier's formula" under which certain areas of Donetsk and Luhansk regions will be granted special status after a democratic election is held there, Ukrainian Foreign Minister Vadym Prystayko has said at a meeting with the parliamentary committees on foreign policy and Ukraine's EU integration.

He said that the Normandy Four advisers agreed on the "Steinmeier's formula" on 2 September.

"The Normandy Four advisers agreed on a specific text that states that the law on special status comes into force 'in a preliminary format' at the time of the election. And this law finally comes into force when the OSCE / ODIHR decides that the election has been held in accordance with high OSCE standards," Prystayko said, as quoted by Interfax-Ukraine.

Pristayko emphasized that "there are no other words" in what the advisers agreed on 2 September.

"Neither how elections are [to be] held, nor who comes first, nor that they are held 'at gunpoint' or when control over the border is restored. All that appears now is 'warts', this is an understandable human reaction," he said.

In addition, according to the minister, the advisers agreed to resolve the issue with the deployment of forces in the conflict zone in Donbas in the three previously agreed sections of the contact line.

"I know that our Russian partners, the negotiating partners, I mean, put forward the third proposal that a document should be agreed and later signed by the leaders. This sounds logical but even this point was not discussed by the four advisers, including the Russian representative," he added.

Ukraine adopted a law on the special procedure for local self-government in certain areas of Donetsk and Luhansk regions in autumn 2014. In the spring of 2015, it was amended. The law stipulates that the special status provisions will enter into force after democratic elections are held in these areas and mercenaries are withdrawn.