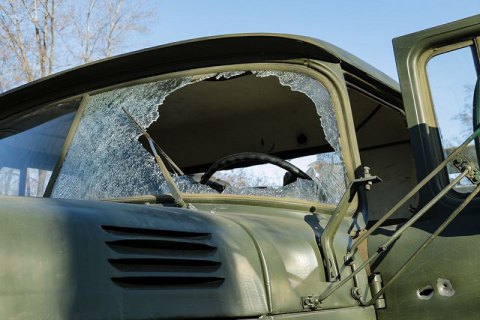 A Ukrainian military lorry was hit from the Fagot anti-tank guided missile system in the Joint Forces Operation (JFO) area in Donbas on 21 November, the JFO HQ has said.

At the time of the attack, the vehicle was not on the front line but in the population centre of Shumy. It brought food and water for servicemen at remote positions.

"No-one could simply expect such a dirty act that someone would use such a powerful weapon in a peaceful village populated by civilians only," the report says.

According to the military, the missile was launched from a distance of about 2.5 km. The operator tried to direct the missile into the cockpit but got the distance wrong and hit the wooden side of the lorry.

Three servicemen, including one woman, got shell shocked. They are being treated in a military hospital.

As reported earlier, a Ukrainian military was shelled near Hnativka close to where the disengagement of forces was taking place on 10 November. Four servicemen were wounded then.