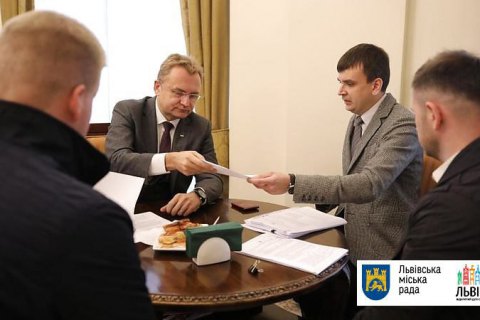 On 21 November, Lviv mayor Andriy Sadovyy was served a notice of suspicion under Article 28 Part 2 and Article 364 Part 2 of the Criminal Code (abuse of office).

"In 2015, the city of Lviv found an investor, the CTP company, at an open investment competition. We received 54m hryvnyas for land from this company. This was the field on which the company was to build an industrial park. Starting from 2015, this issue has been blocked from all sides: at the level of state authorities, the Prosecutor-General's Office. Since then, prosecutors have been coming and going, investigating, but the land has been idle," the mayor's press service quoted him as saying.

"This park has been frozen. There was grass where the cows grazed, today this area is awaiting the start of work. It was planned to create 3,000 new jobs there. I guess I received this gift on St Michael’s Day. This happens, this is the reality of our life. There may be a trial and there will be the issue of bail. With God's grace, we will be able to resolve this issue," the mayor said.

Later the Special Anticorruption Prosecutor's Office said on Facebook that in 2015, over 60 citizens complained to law-enforcement bodies about the illegal alienation of their land.

Prosecutors found out that Lviv city council officials had sold 23.49 hectares of land below its value. According to prosecutors, the land did not even belong to the Lviv territorial community and could not be sold because it is farmland.

In summer 2015, CiTyPark Lviv, a subsidiary of the Dutch company CTP, was declared the winner in the investment competition to build the industrial park Ryasne-2. It was to invest 50m euros in the project.