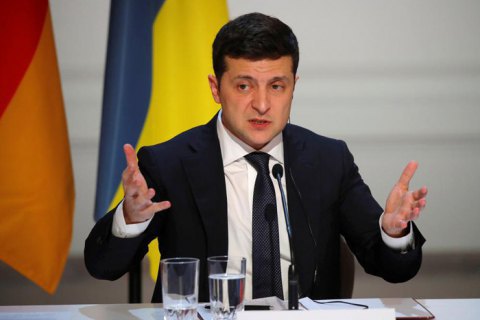 President Volodymyr Zelenskyy, who is on a visit to Azerbaijan, has commented on today's clashes between police and the far-right National Corps outside parliament.

The head of state said the clashes were a manifestation of resistance to land reform by the "old elites".

"Everyone has the right to peaceful assembly. Everyone has the right to express an opinion. And everyone must bear responsibility if the other suffers from his actions. Discussions about legislative initiatives should not violate the law. I respect the opinion of Ukrainians and have been listening to reform proposals for months. However, these are political slogans, not the voices of farmers that are heard at the rally concerning the land bill. Both protesters and policemen have suffered because of them," the president said on Telegram.

According to him, this is not the way of a civilized country, and if Ukrainians want a better life, they must learn to speak, respect each other and finally live together.

"The authorities, as promised, are introducing amendments to the land bill between the first and second reading on the basis of discussions with Ukrainians. We are listening to people. And that is how Ukraine will move towards a better life despite the resistance of the old 'elites'. I guarantee this," Zelenskyy said.

Seventeen policemen were lightly injured during violent clashes with the National Corps on 17 December.