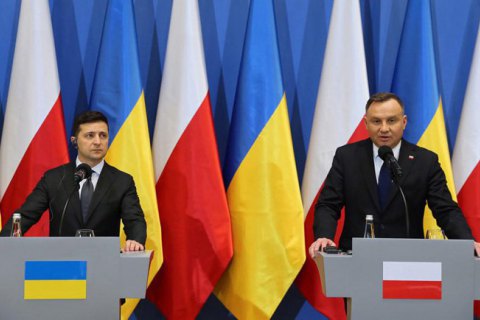 President Volodymyr Zelenskyy has said that Ukraine aligns itself with Poland's position in its historical dispute with Russia on the responsibility of the Soviet Union for unleashing World War II.

"Poland and the Polish people were the first to feel the consequences of the criminal collusion between the totalitarian regimes. This resulted in the start of World War II and allowed the Nazis to ratchet up the deadly Holocaust," Zelenskyy said at a briefing in the wake of a meeting with Polish President Andrzej Duda in Warsaw.

A dispute on the extent of the Soviet Union's responsibility for the start of World War II broke out between Poland and Russia in late 2019.

Polish Prime Minister Mateusz Morawiecki accused Vladimir Putin of lying when he said that the USSR did not invade Poland in September 1939 but "sent its troops into the country which was disintegrated and the authorities did not control the situation".