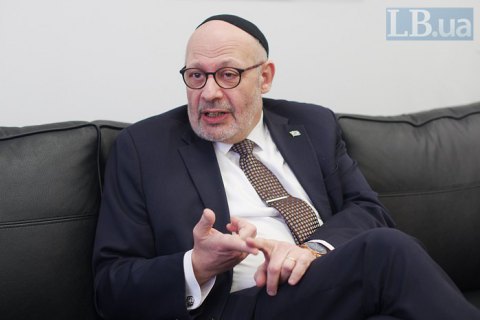 Israeli society and the government understood the decision of President Volodymyr Zelenskyy to relinquish the seats of the Ukrainian delegation at the World Holocaust Forum to survivors.

In an exclusive interview with LB.ua Israeli Ambassador to Ukraine Joel Lion said: " Israeli Minister of Environmental Protection Zeev Elkin and other Israeli ministers also gave up their seats at the ceremony in favour of Holocaust victims, so Zelenskyy’s decision was understandable... President Zelenskyy, by the way, offered one of the seats to my mother but we did not want to do this," the diplomat noted.

The ambassador recalled that the third early election campaign was under way in Israel, therefore various officials can make different statements about foreign leaders.

At the same time, Lion said that the Yad Vashem administration initially invited Holocaust victims but did not take into account their age.

"I know from Yad Vashem's employees that it was decided to invite Holocaust victims, but they also had to take into account that this can be physically difficult for people. When so many heads of foreign states arrive, the security system is so rigid that it is sometimes easier to watch the ceremony on TV at home," the ambassador said.

As reported earlier, Zelenskyy visited Israel for the Holocaust Forum but did not attend it. He offered the seats of the Ukrainian delegation to Holocaust victims and their families. Thus, he skipped the key ceremony of the forum, where one of the speakers was Russian President Vladimir Putin.

Instead, at the invitation of Chief Rabbi of Ukraine Moshe Reuven Azman, Zelenskyy visited the Wailing Wall, where a prayer was said for peace in Ukraine.