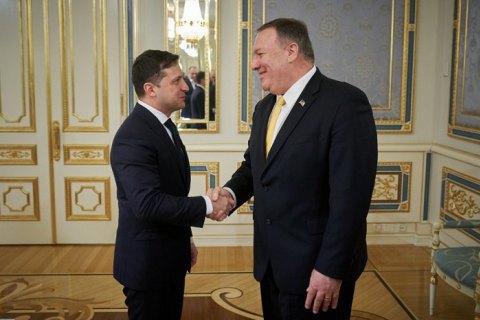 President Volodymyr Zelenskyy has praised relations with the USA as "warm and important" and denied the allegations that they were damaged by the impeachment trial of US President Donald Trump.

"It seems to me that there is a new step in our relationship, a new sense, we meet a lot. I'm not sure that these warm and important relations were somehow affected by the impeachment of Mr. President [Trump]. I have repeatedly said that this is our strategic partner. We are doing everything to improve our relations," Zelenskyy said at a press briefing with visiting US Secretary of State Mike Pompeo in Kyiv.

He continued: "Today, Ukraine has no doubt about a strategic partnership with the United States of America. We are confident in the successful implementation of all our joint plans, the plans of Ukraine and the United States."

Zelenskyy said he hopes that the US Department of State will appoint an envoy for Donbas and Crimea.

"Today, I expressed hope that the United States of America will be more actively involved in the processes of peaceful settlement in eastern Ukraine and de-occupation of Crimea through the appointment of a separate State Department official in charge of these issues," he said.

He noted that Ukraine was ready to develop new forms of security partnership with the USA.

Zelenskyy said that the first ever contract on the direct purchase of the Javelin anti-tank missile systems was a proof of this.

He recalled that Ukraine was actively cooperating with US partners in defence industry reform.

"This will give an impetus to mutually beneficial cooperation with US top defence companies," he suggested.

Speaking on prospects for trade cooperation, he called on the United States to cancel a 25% duty on Ukrainian steel imports because it was a "sensitive" issue for Ukraine's metallurgical exports.