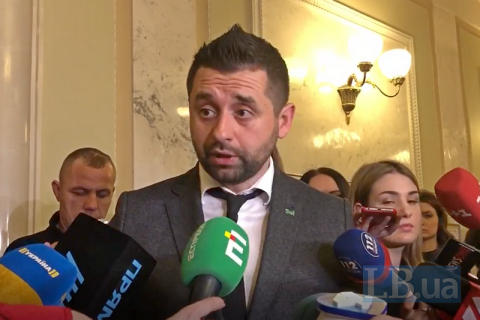 The leader of the propresidential Servant of the People faction, Davyd Arakhamiya, has said that Prosecutor-General Ruslan Ryaboshapka can be dismissed on 5 March.

He insists that there are enough votes for this.

“The fact that he did not sign [a suspicion notice for] Mr Poroshenko was the final straw, perhaps. Because everything is ready to sign the suspicion notice but no-one is doing anything,” Arakhamiya told journalists.

He added that the plans to dismiss Ryaboshapka have “absolutely nothing to do” with tycoon Ihor Kolomoyskyy’s discontent with the top prosecutor. He does not consider Kolomoyskyy influential enough to “force parliament to vote unanimously” for Ryaboshapka’s dismissal.

According to Arakhamiya, there are more than enough votes to make him go.

“Indeed, it is a failure of the Prosecutor-General’s Office. And of the prosecutor-general’s deputies,” he said.

A draft resolution on the vote of no confidence in Ryaboshapka was registered with parliament on 3 March.

It says that “investigation into criminal offences, above all corruption crimes, has been one of the key demands of society”. MPs who signed the draft resolution believe that Ryaboshapka has failed this task and has been ineffective.

"Non-investigation, the dragging of investigation of the most high-profile criminal proceedings indicate the unwillingness, impossibility or inability of the prosecutor-general to ensure the fulfilment of tasks assigned to the Prosecutor’s Office by law," the draft resolution reads.

The explanatory note lists some of such criminal cases, in particular the case of former National Security and Defence Council Deputy Secretary Oleh Hladkovskyy, the case of Lviv mayor Andriy Sadovyy, the case of “the godfather of smuggling”, Vadym Alperin, the case against the suspected killers of Yekateryna Handzyuk, and the Burisma case.