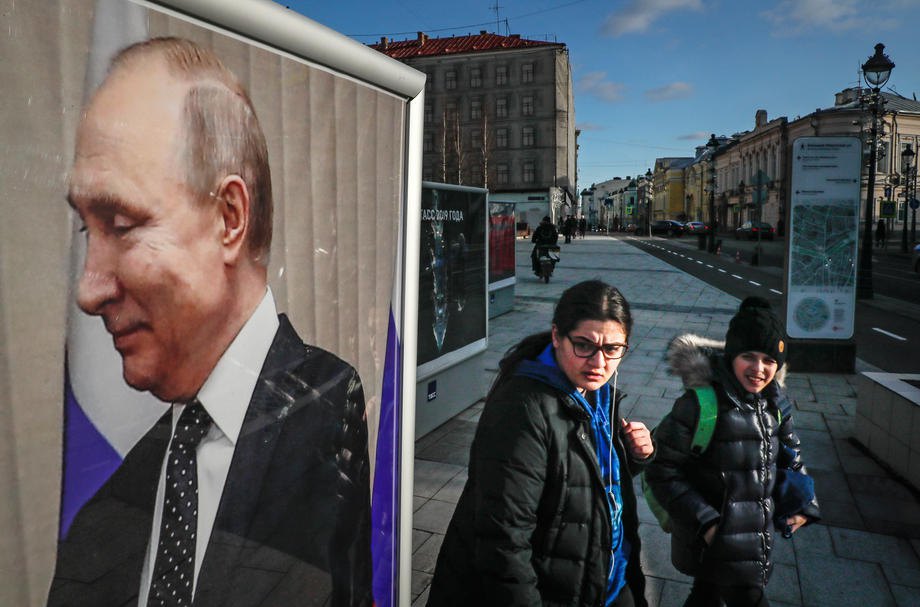 Though Russians are under a pressure of Western sanctions, yet 70 per cent of the Russian population support the Putin's regime. The trend prevails so far. How does an average Russian end up with such a conflicting cognitive dissonance? Why is the support of Putin's politics still 'important' to Russians?

The Russian economy has been developing for over twenty years due to an active political and financial support from a lot of Western countries. Now that support continues to vanish. Putin considers the current situation as a conflict between him and the Kremlin's former business partners in the West who have deceived Russia. The Russian Government remains convinced that continuous talks about human rights and values of a free world is an unnecessary demagogue which stands on the way of real business. To make it easier to understand, the population of current Russia has the same behavioural patterns as the population of the Soviet Union. Putin has secured the same old self-identification algorithm for Russians and they gladly accepted it. They renounced freedom in an exchange for a relative economic stability and the quality of such stability does not matter to them.

Russians apart from Moscow and St. Petersburg live in an absolute poverty and are isolated from their country's overall economic reality. Their world view and current life circumstances seem not to be traumatic for them.

For twenty years the Putin's power has been based on his personality cult. His leadership style combines images and patterns of an Eastern monarch and a tribal leader. There is nothing European in it as it reminds a Muammar Gaddafi and Saddam Hussein's modus operandi.

What is it or was it like to be a citizen of an authoritarian state like Russia, North Korea or Nazi Germany? What protective mechanisms of human dignity are currently at work and can they be turned off under the certain circumstances? How long it will take to do that?

The majority of European states were authoritarian at the beginning of the European history. Democracy, as we understand it today, is a young historic phenomenon. Authoritarian regimes, despite the major cultural differences have a similar feature: they reconstruct a developmental algorithm of the past. They speak about strength and greatness of their countries having quite weak arguments for their justification. A basis for supporting totalitarian regimes by Russians- and the Putin's regime is totalitarian, not authoritarian - is a totality of a pleasant feeling that the whole world is afraid of Russia.

Even if you are nobody, everyone in the world is afraid of you in spite of your limited personal and professional achievements. You have gained the power and authority over the whole world with quite an insignificant effort: just support your reliable tyrant. How not to love a person who have just provide you with a high level of such self-esteem?

Putin is often compared to Hitler. Yes, there are many similarities in the Hitler's propaganda machine and motivation for his support with the Russian ones. While Hitler and Himmler's cultivated a lack of human conscience in the SS and Gestapo behavioural patterns, Putin obliged all of Russia to speak out and behave like the SS and Gestapo combined.

This pattern might last as long as it lasted in the Soviet Union. It resulted in two or three completely lost generations of Soviet people. Future collaboration with the West looks possible only with young Russians though it will not be easy. It is important in this case to take into consideration those quite substantial social difficulties which had risen and continue to exist in Germany after the Berlin's Wall.

Are katsaps governed by conscience? Q&A session with Oleh Pokalchuk

What reasons could justify a Kremlin's nuclear strike? What could unwind a spiral of a nuclear violence? A possibility of a Russian nuclear attack is an integral part of a Putin's reputation in the Russian society. Such was the case with the leaders of the Soviet Union. Putin is not interested in the world where Russia does not lead according to its own rules. Putin is very similar to Stalin and Hitler in their paranoia for a world dominance. Putin does not believe that the West might not be afraid of him. He can only be stopped by a demonstration of a unified and coordinated international force, as Khrushchev was stopped during the Caribbean crisis.