Photo: Photo: Office of the President of Ukraine

This is evidenced by the analysis carried out within the framework of the project "Russia will pay" by the team of the KSE Institute (analytical unit of the Kyiv School of Economics) and volunteers from partner organizations, in particular, the Center for Economic Strategy, Dragon Capital, the Anti-Corruption Headquarters, the Institute of Analysis and Advocacy, Transparency International Ukraine and the State Enterprise "Prozorro. Sales”

According to the joint estimates of the Ministry of Economy and KSE, the total losses of Ukrainian economy due to the war, taking into account both direct losses calculated in this project and indirect (decrease in GDP, termination of investments, outflow of labor power, additional defense and social support costs, etc.), range from $564 billion to $600 billion. 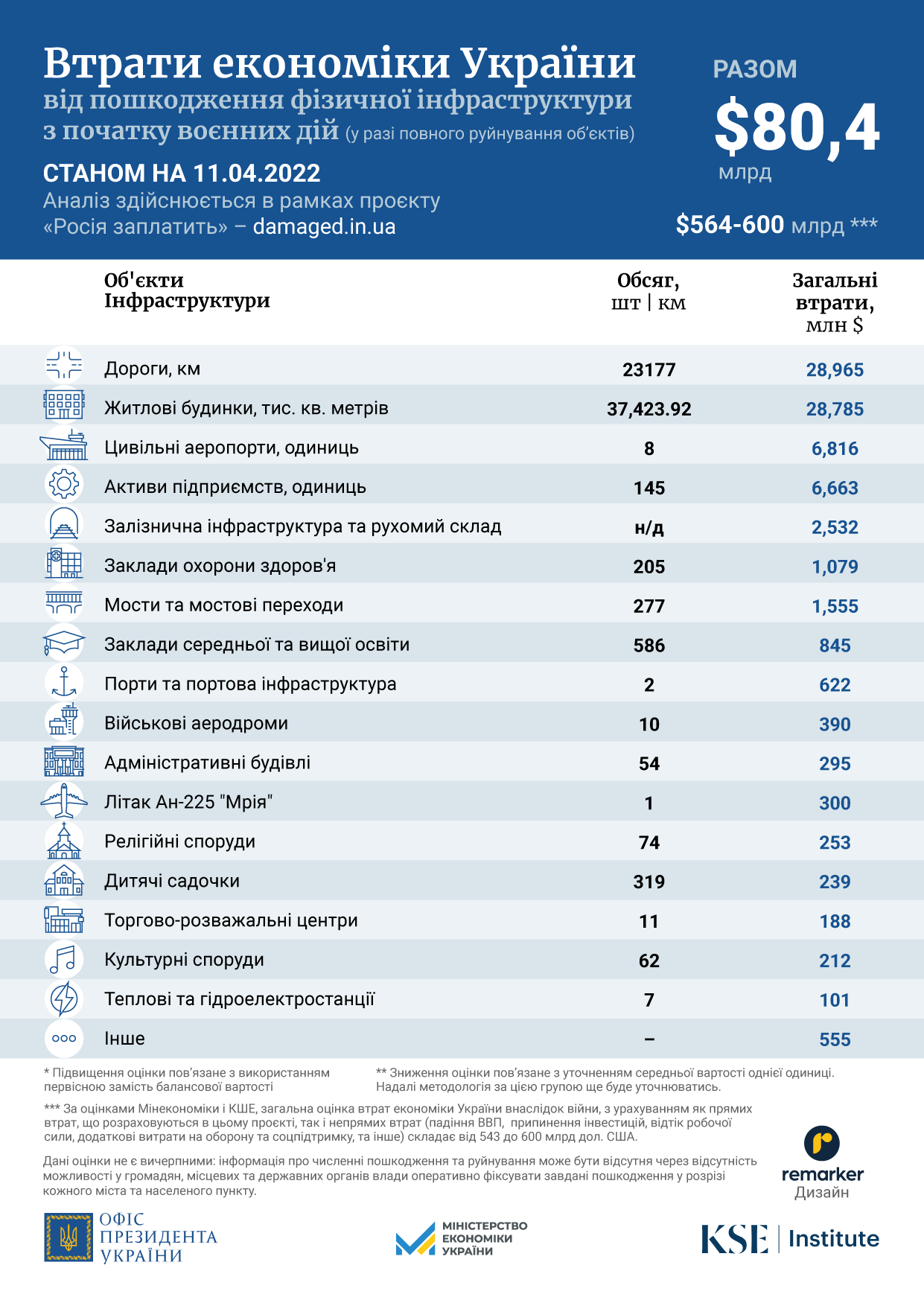 In total, during 47 days of russian aggression in Ukraine, at least 23 thousand kilometers of roads, 37 thousand square meters of housing stock, 319 kindergartens, 546 educational institutions, 205 medical institutions, 145 factories and enterprises were damaged, destroyed or captured. In addition, at least 54 administrative buildings, 277 bridges and bridge crossings, 10 military airfields, 8 airports and 2 ports were damaged as a result of the war. As of April 8, at least 74 religious buildings and 62 other cultural buildings were damaged, destroyed, or captured.

The largest increase in the cost of losses this week has led to an increase in the expense "residential real estate," which is caused by both an increase in destruction and a clarification of previous data on destruction that occurred earlier, as well as certain adjustments in the evaluation method. The second largest reason for growth is the loss of assets of enterprises. Also, in the updated calculations, the cost of healthcare institutions was clarified, taking into account the structure of these institutions in the context of types (hospitals, ambulatories, clinics, laboratories, etc.).

Direct losses of Ukraine from damage to physical infrastructure, based on public sources and data of authorities, as of 11.04.2022, since the beginning of combat actions are:

Analysis of direct losses of industrial objects documented in public sources shows that metallurgy, coke and oil refining enterprises, as well as mechanical engineering, have suffered the greatest losses. According to project analysts, the total amount of direct documented losses to the industry as of April 11 reached $6.25 billion.

Direct losses of assets of enterprises as a result of combat actions, in terms of industries, $ billion, as of April 11

Earlier, the project "Russia will pay" focuses on assessing the direct losses of Ukrainian physical infrastructure as a result of the war (destruction of residential buildings, utility, road and railway infrastructure; educational and medical institutions, etc.); and assessing the financial value of these losses. At this time, the project does not assess the overall losses of the economy, which include not only direct infrastructure losses, but also the numerous "side" losses that the economy suffered as a result of the war (closure of a significant number of enterprises; hundreds of thousands of people lost homes and jobs; termination of any investments; reduction of consumer demand of citizens, etc.).

Every citizen can provide information about the loss of physical infrastructure, in particular residential buildings, as a result of the war. For this purpose, the KSE Institute team, together with the Office of the President and the Ministry of Economy of Ukraine, created the project "Russia will pay" (https://damaged.in.ua/). You can also submit damage information using a chatbot or in the application "Kyiv Digital."

These assessments are not complete: information about numerous damages and destruction may not be available due to the lack of opportunity for citizens, local and state authorities to quickly record the damage caused in the context of each city and settlement. 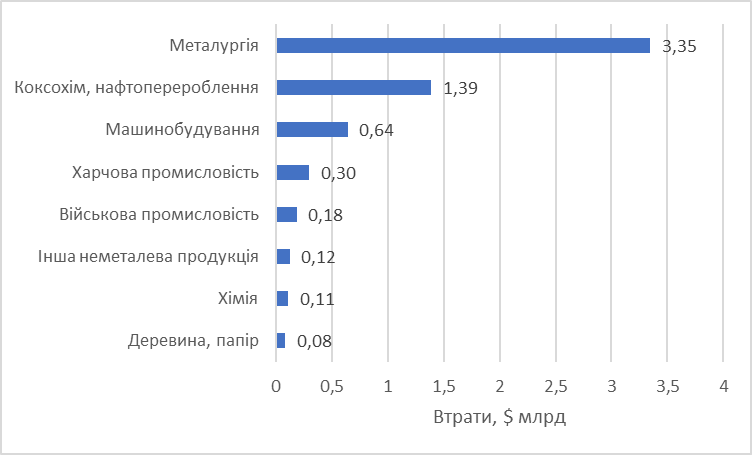 Due to the absence of information at this stage, the assessment includes only losses from damage/destruction of buildings, not taking into account the cost of equipment (in particular in hospitals, scientific institutions, damaged vehicles, etc.). These estimates will be added gradually at the next stages of the indicator updates.

Also, the assessment does not take into account information about damage caused by combat actions, mining, to natural resources, farm business, company stocks (in warehouses, stores, etc.), movable property, military property, telecom operators property, etc. This information will be supplemented and clarified after the completion of combat actions in the respective regions of Ukraine.