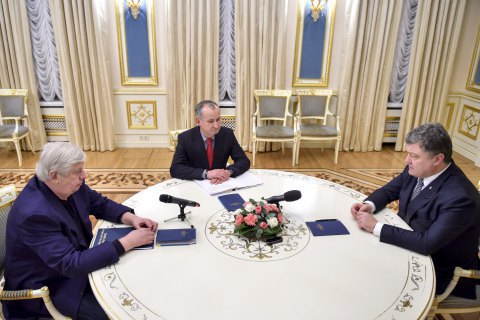 President Petro Poroshenko has been briefed by the head of the Security Service of Ukraine (SBU) and the prosecutor-general of Ukraine on the newly revealed details of the investigation into crimes against Maydan protesters - arms with which the activists were killed were finally found, the president's official website has said.

SBU chief Vasyl Hrytsak said that the fragments of 23 firearms used against Maydan protesters had been found. The arms were mechanically damaged, ID numbers were filed off. The tests helped the SBU to identify 12 out of 23 guns.

"With a high degree of probability we can say that these are the fragments of 22 Kalashnikov rifles, one Kalashnikov machine gun and one 12 gauge smooth bore barrel," he said. The case files were sent to the Prosecutor-General's Office and the Interior Ministry.

Prosecutor-General Viktor Shokin said that the investigation had already confirmed that these arms had been used against Maydan protesters. He promised to say soon in what specific incidents the arms were used.

"All those guilty of the massacre must be brought to justice, including those who issued criminal orders," Poroshenko said.

The president said he would demand that parliament pass amendments to the law on trial in absentia at the coming parliamentary session.

As reported earlier, the Foreign Ministry and the International Development Ministry of France possess the information that "agents of Russian intelligence services" were among the snipers who executed people on Maydan.

Ukrainian prosecutor Vladyslav Kutsenko earlier said that the order to shoot at Maydan protesters was issued directly by then President Viktor Yanukovych.