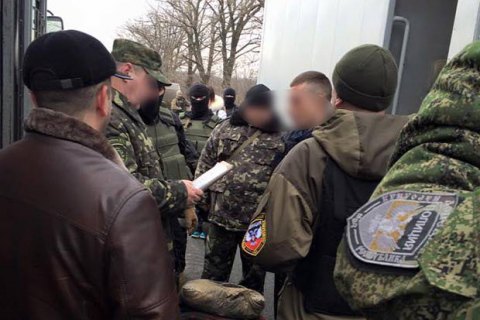 Militants of the self-proclaimed Donetsk People's Republic have handed 18 convicts, who served their sentences on occupied territories, over to the Ukrainian authorities, Iryna Herashchenko has said on Facebook. Herashchenko is Kiev's representative in the humanitarian subgroup of the trilateral contact group on a Donbas settlement.

"Today ombudsperson Valeriya Lutkovska together with the representatives of the Security Service of Ukraine and the penitentiary service picked up 18 convicts who were handed over from the occupied territories to serve their sentences in prisons on Ukraine-controlled territories. These people had committed grave crimes and had been sentenced to long prison terms (some for life) by Ukrainian courts before the conflict broke out in Donbas," she said.

According to Herashchenko, there are about 10,000 convicts on the occupied territories. Around 1,000 of them want to serve the rest of their sentences in Ukraine. The relatives of about 300 convicts sent a letter to Lutkovska to ask her assistance to their transfer to Ukraine-controlled territories.

She added the lists for transfer are compiled by militants.

She regretted there was no progress in the release of hostages, about 140 of whom are on the list pending an exchange.

On 13 January, the trilateral contact group in Minsk agreed a cease-fire and a release of over 50 prisoners by both sides. No progress has been achieved since then.