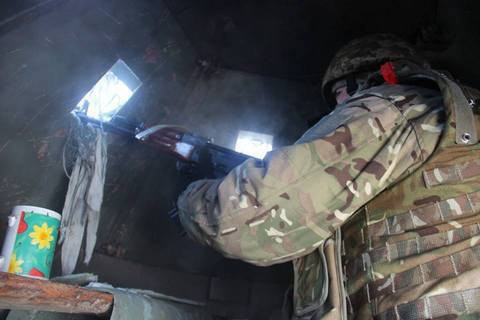 The antiterrorist operation (ATO) HQ has said that in the morning the separatists launched massive attacks with mortars of various calibres near Avdiyivka. The militants used grenade launchers, machine guns and firearms.

Heavy weapons banned by the Minsk agreements were used near Luhanske, Zaytseve and Opytne. From the side of Mineralne, the militants launched bombs of bigger calibres in the direction of residential areas.

In the Mariupol sector, they used 82-mm mortars near Lebedynske and grenade launchers, heavy machine guns and small arms near Maryinka, Novotroyitske and Vodyane.

The Ukrainian Armed Forces seven times returned fire in the area of Avdiyivka and Lebedynske.

Two Ukrainian servicemen were killed and 10 wounded in Donbas yesterday. One serviceman was killed near Novozvanivka, another near the Butivka mine on Donetsk's outskirts.