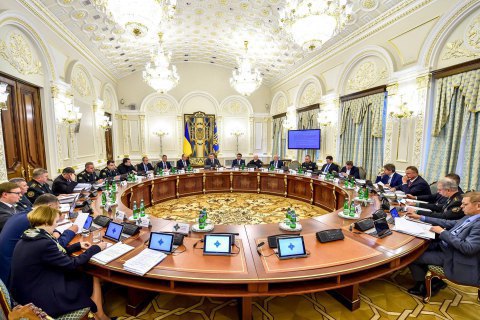 The National Council of Reforms chaired by President Petro Poroshenko discusses the Plan of the Top-Priority Steps of the Government for 2016, his website has said.

"We have convened a meeting today to discuss a very important issue. Several days ago, the Government presented its plan of actions. I would like to express gratitude to Prime Minister Volodymyr Groysman and all government members for taking into account the provisions of the Strategy of Sustainable Development 'Ukraine-2020 and the decision of the National Council of Reforms," the president said opening the session.

"This is the document which allows us looking into the future confidently," he noted and emphasized that specific directions, terms and liability of every minister for the fulfillment of the given Plan had already been defined.

The National Council of Reforms will discuss the document with representatives of the Parliament and civic organizations. Proposals will be taken into account by the government, which will approve the document shortly.

The president and the prime minister are grateful to the group of advisors – Ivan Mikloš, Leszek Balcerowicz and many other foreign partners who paid a lot of effort to create a high-quality document.

"We have done a lot, but it is important to maintain the pace of reforms," Petro Poroshenko emphasized.

The president recalled that the Strategic Defence Bulletin had been approved by the NSDC. It has been commended by NATO partners and described as a "fateful document providing for a drastic reformation of the security and defense sector".

In addition, he highlighted the importance of decisions on the creation of anti-corruption infrastructure and emphasized the necessity of including the program of creation of the State Bureau of Investigation, intensification of activities of the National Agency for Prevention of Corruption and introduction of e-declarations into the Government’s Plan of Actions.

"We expect the implementation of numerous materials elaborated by the Anti-Corruption Prosecution and National Anti-Corruption Bureau in the nearest time," the president noted.

"The key position is to ensure the revival of economy, as well as maintain security and defense where we should rebuff the aggression of Russia and restore Ukrainian sovereignty over the occupied territories of Donbas and Crimea," he said.

In his turn, Advisor to the President, Co-Chair of the Group of Strategic Advisors on the Maintenance of Reforms in the Government Leszek Balcerowicz expressed confidence that the standard of living of Ukrainians could have been much higher, "because there are reserves for that".

According to him, current situation in the state is caused by the lack of complex and rapid reforms, particularly in 1992-1999 and 2008-2014. There have been some pinpoint changes and accumulation of debt. These factors, as well as economic consequences of Russian aggression against Ukraine, including exports blocking, have caused recession.

"Against the backdrop of this situation, one must praise the achievements of the Ukrainian democratic authorities over the past two years," Leszek Balcerowicz stated. The National Bank of Ukraine has eliminated threats to the banking system. Foreign trade diversification, exports of goods, reduction of gas imports from Russia are the steps towards the better future, as stated by him.

"It is important to have complex programs. But the most important thing is to implement them with consideration of strategic goals of the state," Leszek Balcerowicz concluded.