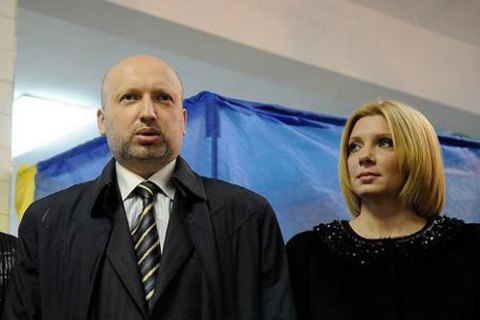 The secretary of the National Security and Defence Council (NSDC), Oleksandr Turchynov, has said his wife Hanna, who was attacked by a resident of Donetsk Region armed with a knife, was saved by a guard.

"Thank God, my wife and her colleague, who was around her, were not hurt. I would like to thank the guard whose professional actions saved a human life, and employees of the National Police of Ukraine who promptly arrived at the crime scene and detained the attacker," he said on Facebook.

"The terrorists cannot defeat us in combat and therefore they perfidiously try to settle scores with helpless women. But their attempts to intimidate me or my family will not succeed," he added.

On 25 May, Hanna Turchynova was attacked by a resident of Donetsk Region armed with a knife, who arrived from the occupied territory to commit this attack. This happened in the institute where Hanna works, Interior Minister Arsen Avakov said earlier.

The attacker was detained by the National Police. A set of knives was found on him.