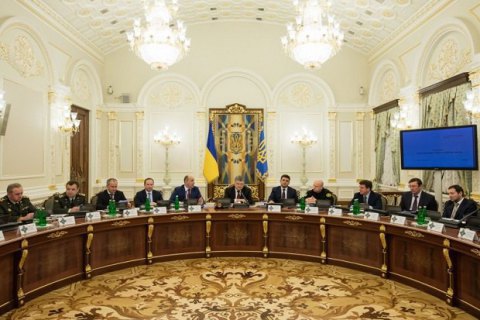 The Council of National Security and Defence of Ukraine on Thursday introduced additional sanctions against natural and legal persons of the aggressor state, Russia.

The NSDC said in a statement that the sanctions, in particular, "have been imposed on Crimea residents who have been elected to the Russian State Duma, as well as against the members of the so-called election committees and Ukrainian enterprises in Crimea that have been re-registered as Russian companies.".

The sanctions also cover Russian senior officers of law enforcement agencies and courts involved in the illegal detention of Ukrainian citizens in Russia.

The NSDC also applied sanctions against Ukrainian officials who are declared wanted, hiding abroad or are involved in the financing of terrorist activities and hybrid aggression against Ukraine.

The sanctions have been imposed against the Russian-controlled legal entities involved in the Russian hybrid war against Ukraine in the field of information and cyberspace.

"To ensure transparency and synchronization, all sanctions on individuals and legal entities, have been extended for another year", - emphasized in the National Security Council.

Also, the Council supported the developed by the Ministry of Defense draft state program of development of the armed forces for the period up to 2020 and changes in the military-administrative division of Ukraine.