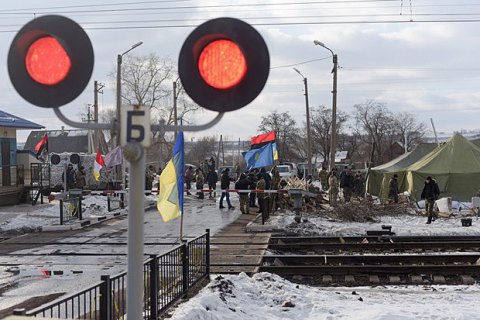 The organizers of the blockade of the railway lines with the occupied territories said they pull out of the talks with Prime Minister Volodymyr Groysman.

The blockade headquarters called on the patriots of Ukraine to render assistance to the participants of the blockade and stated plans to shortly expand the geography of the blockade to cut the remaining routes of the "trade on the blood".

The headquarters said in Facebook release that they "under any circumstances" would stop the blockade before the full implementation of the requirements of protesters, including "the release of prisoners and the prohibition of trade with the occupiers of Ukraine".

The blockade headquarters say they are pulling out of the talks called with the government because of the "conformity of the positions of Putin, Zakharchenko, Plotnitskyy and Ukrainian leadership on the blockade.

On Monday, the leaders of the "D/LNR" Aleksandr Zakharchenko and Ihor Plotnitskyy issued a joint statement in which they demanded that Ukraine before March 1 stopped the transport blockade of Donbas, threatening to impose external management at all enterprises of Ukrainian jurisdiction, working in their territories and stop the supplies of coal.

Last week, the organizers of Donbass blockade met with Prime Minister Groysman and announced said they have received a compromise proposal from the government.