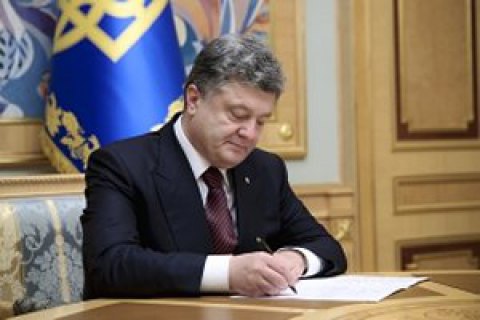 President Petro Poroshenko issued a decree implementing the March 15 decision by Ukraine's National Defense and Security Council (NDSC) on the temporary cessation of the movement of goods across the contact line in Donbas.

The Decree №62 dated March 15 is posted on the website of the President.

"Temporarily, pending the implementation of paragraphs 1 and 2 [cease-fire and withdrawal of arms] of the Minsk set of measures as of 12 February 2015, as well as the return of the captured enterprises to functioning in accordance with the laws of Ukraine, stop the transportation of goods across the contact line within Donetsk and Luhansk regions," the document reads.

The reasons for the transport blockade are the significant aggravation of the security situation in the ATO zone; forcible seizure of Ukrainian enterprises; the escalation of threats to economic and energy security of Ukraine, provoked by the actions of terrorists; the decree of Russian president on the documents issued by recognition issued by the "DPR" and "LPR"; and the escalation of aggression by the Russian Federation against Ukraine.

The government is instructed to take immediate measures to stop the movement of goods across the contact line within Donetsk and Luhansk regions, except for the goods of humanitarian character and provided by Ukrainian and international humanitarian organizations.

At a NSDC meeting on Wednesday, Petro Poroshenko suggested to temporarily stop transport communication with the occupied territories of Donbas.

The NSDC supported the president's proposal, and all the roads and railway tracks crossing to the contact line have been blocked for cargo transport since 13:00 (Kyiv time), March 15.