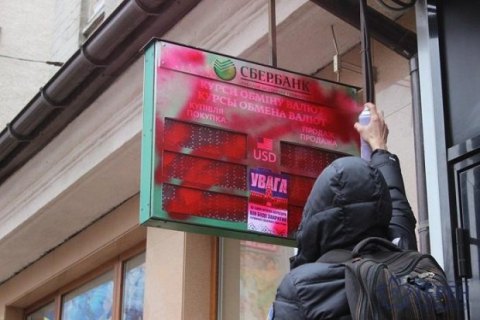 Russian Sberbank Bank announced plans to get rid of its Ukrainian "daughters". "We are looking for ways out of Ukraine. With this position of the government, we do not have a lot of time. I would not want to comment until we reach a final decision," the head of Sberbank, German Gref, said on Tuesday.

According to the Russian Rambler News Service, Gref dismissed Ukrainian sanctions against Sberbank in Ukraine as "illegal."

"The situation in Ukraine is quite complicated and emotionally difficult, considering the combination of absolutely illegal actions that are committed against us in a number of cities in Ukraine, with the connivance of law enforcement bodies," he said.

With the assets at 50 billion hryvnia, PJSC Sberbank is one of the largest In Ukraine, and the largest bank with Russian capital. It is second largest to state-owned Privatbank, Oschadbank, Ukreximbank, Ukrgasbank, and Austrian Raiffeisen Bank Aval.

Russian Sberbank also owns Lviv-based VS Bank (formerly of Volksbank), which rates 29th in Ukraine in terms of assets.

The deputy governor of the NBU Yekateryna Rozhkova earlier said that all Ukrainian banks, owned by Russia, are put up for sale.

On March 16, Ukraine slammed sanctions for a period of one year on Sberbank, VS Bank, Prominvestbank, VTB Bank, and BM Bank, all state-owned in Russia. The sanctions provide for restrictions on the withdrawal of capital outside of Ukraine in favor of related persons.