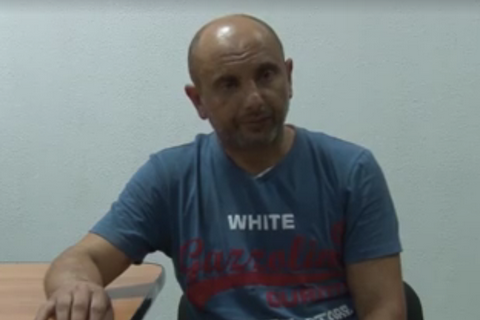 Andriy Zakhtey, a suspect in the "case of Crimean saboteurs", has been moved to a disciplinary cell for two days over a violation of the remand centre regulations, his wife Oksana Zakhtey has told Krym.Realii. "He was locked for a violation of discipline: once he said something wrong, once he stretched along the wall in a wrong way. These days he was informed that he would be put into a disciplinary cell for two days. He signed the notification and was taken away yesterday evening (16 September)," she said.

She added that they are expecting the final verdict in her husband's case to be issued in late October-early November.

Russia charged Zakhtey with plotting an act of sabotage. He was detained near the village of Suvorove in Crimea in the early hours of 7 August 2016. Investigators insist that he was waiting in his car for a sabotage team of Ukraine's Main Intelligence Directorate which was plotting explosions in the peninsula.

Zakhtey said that he was to pick up clients and did not know what they were going to do. According to him, FSB operatives jumped into his car and he took them where they told him. There was a shootout between Russian law enforcers and suspected "Crimean saboteurs", in which FSB Col Roman Kamenev and a contract soldier of the airborne troops, Semen Sychev, were killed.

Zakhtey told lawyers that after the detention, he was severely tortured by electrocution to force him to confess on camera. In July 2017, Zakhtey pleaded guilty, refused from lawyers' services and started cooperating with the investigation.