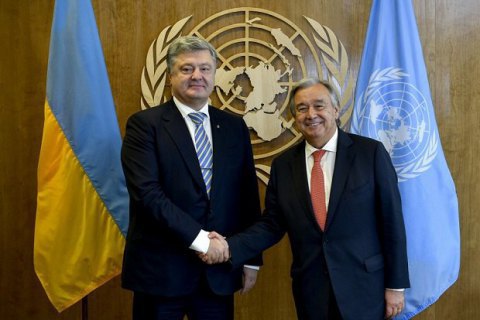 Ukrainian President Petro Poroshenko has met UN Secretary-General Antonio Guterres on the sidelines of the 72th session of the UN General Assembly. They discussed the UN involvement in settling the situation in Donbas, in particular the prospects for the deployment of a full-scale peacekeeping mission in Ukraine. The Ukrainian president stressed that only a full-scale peacekeeping mission with a comprehensive mandate can contribute to achieving the main goal – the restoration of peace in Donbas, Poroshenko's the press service said on 21 September.

They stated that the deployment of a mission should take place with a clear observance of the UN basic peacekeeping principles.

"In the context of the implementation of the UNGA resolution on the human rights situation in Crimea, the Ukrainian president noted the need for further action by the international community to force Russia to fulfill this document. In particular, the Russian Federation must ensure safe and unhindered access for the existing regional and international monitoring human rights organizations to the peninsula," reads the statement.

Poroshenko thanked the UN for providing humanitarian assistance to internally displaced persons and the affected civilian population of Donbas, and called on the UN to join the hostage exchange process.

Earlier in the day, President Petro Poroshenko said after talks with US President Donald Trump that the US authorities supported Ukraine's proposal for the deployment of UN peacekeepers to Donbas.