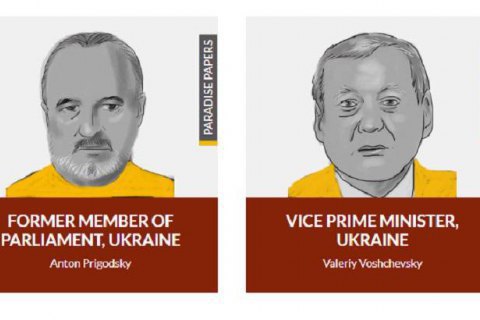 An international journalistic investigation titled Paradise Papers features two names of Ukrainian politicians, RBC-Ukraine wrote On Monday with a reference to the website of the International Consortium of Investigative Journalism (ICIJ).

The global research by ICIJ and over ninety media outlets based on 13.4 million leaked files from Appleby, a leading offshore law firm, and some other sources reveal the offshore activities of powerful people and companies worldwide.

In particular, Anton Pryhodskyy, a former MP from the Party of Regions and former Ukrainian deputy prime minister Valeriy Voshchevsky (Radical Party) have surfaced in the investigation papers. Prigodskiy is listed as the sole shareholder of the TUC company, registered in Malta in 2013, the main activity of which was "shipping activities", including the acquisition of vessels.

According to the financial statements of the TUC, filed in 2015, the company's shipbuilding assets were estimated at about $ 6.6 mn as of 31 December, 2014. The company posted 25.1 thousand dollars in losses, which allowed not paying income taxes in 2014.

In the Register of Companies of Malta Valeriy Voshchevsky is listed as one of the two shareholders and directors of Marfa Holding Ltd. together with a citizen of Malta Marvych Borg. In Marfa Holding, registered in Malta December 10, 2013, Voshchevsky owns 1080 shares while at Borg owns 120.

The investigation is based on data about from 13.4 mn offshore financial documents by Bermuda law firm Appleby, which the German Süddeutsche Zeitung received from an undisclosed source.

The investigation involved 382 correspondent from 96 outlets in 67 countries.