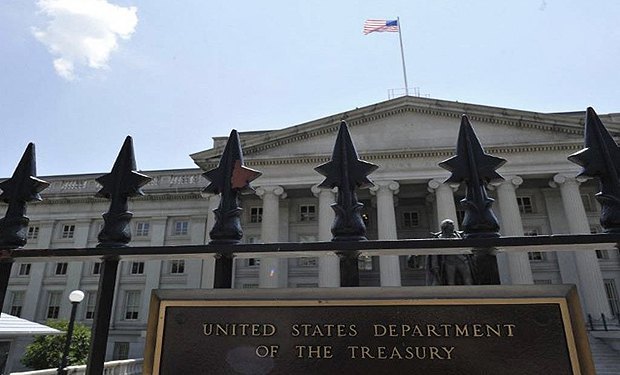 At the same time, this list has already generated very contradictory responses both in the American establishment and in the expert community. On the one hand, a number of experts are sure that the inclusion in the list already generates a lot of problems for Russian elites.

"These two hundred names are a draft appendix to the law, which blames Russia for the war with Ukraine, interference in US elections and human rights abuses. That is, albeit indirectly, it puts moral responsibility for the policy of the Kremlin on the entire Russian political and business bigwigs. Any of these people can find themselves under sanctions at any time. There should no longer be any difference between "St Petersburg lawyers" and "Chekists", "uniformed agencies" and "system liberals", Kremlin towers and clans for the Congress and the White House," Russian journalist and publicist Konstantin Eggert said in his column for Deutsche Welle. He added that the inclusion of Foreign Minister Sergey Lavrov in the list is an "outstanding thing".

The president of the Institute of Eastern Partnership (Israel), Rabbi Avraham Shmulevich, shares the opinion. "The main reason behind the list is Russia's influence on the American elections, and, in principle, on the domestic policy of the West. The huge money that is in the West and is of Russian origin has become toxic and dangerous for the Western economy and political system. The purpose of the list is to neutralize their influence. Just like the money of drug cartels cannot legally influence the decision-making in the West, on the Western economy, and are excluded from it, the task is also to 'exclude' Russian money, and it does not matter how it was earned," he explained in a commentary for LB.ua. 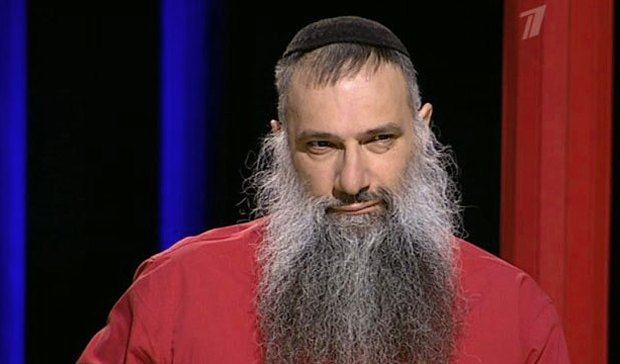 Meanwhile, a number of observers point to the main shortcoming of the "Kremlin list": it does mention any sanctions against these individuals at all. Moreover, according to The Washington Post, on Monday evening, the State Department announced that it would not impose sanctions against Russia, which the Congress adopted by the overwhelming majority in mid-2017, as "the law itself serves as a deterrent" to Moscow.

However, the article says, the law does not have any practical deterrent effect. Moreover, the same evening, CIA director Michael Pompeo said that Russia had not really wound down its operations of interference in the elections, and plans to repeat what it did in 2016 in 2018.

On Tuesday, the Atlantic Council website published an article by Anders Aslund who said that the "Kremlin list" was changed before being submitted to the US Congress. According to him, the expected list was due at midnight on 29 January. The aim of this report was to identify those who had made their fortune on illicit contacts with the Kremlin. The various US government bodies involved clearly carried out conscientious work along these lines, Aslund said.

"At the last minute, however, somebody high up threw out the experts' work and instead wrote down the names of the top officials in the Russian presidential administration and government plus the 96 Russian billionaires on the Forbes list," the economist said.

Thus, Oslund emphasizes, this official ridiculed the government experts who had prepared the "Kremlin list". By signing this list, the secretary of the Treasury took responsibility for it. 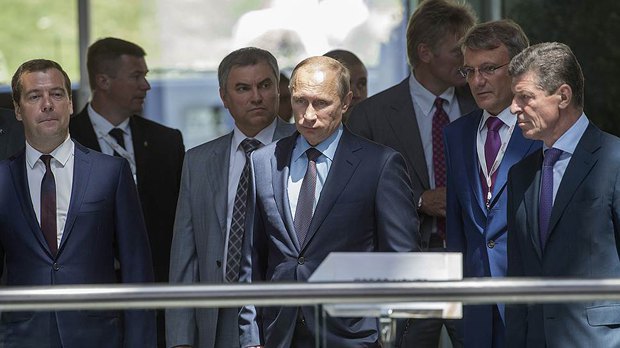 Nevertheless, many experts agree that even in this form the "Kremlin list" is capable of causing significant damage to Putin's entourage. "The document was replaced indeed, but, nevertheless, this is not a disaster," the Russian political scientist and publicist, one of the main experts on anti-Kremlin sanctions, Andrey Piontkovskyy, told LB.ua.

"The expansion of the list as such is of no significance. Yes, the original version had the names of about 40 people closest to Putin who carry top responsibility for his crimes. What we saw now, as some people joke, is a 'phone book'. It's not so bad. For example, I'm not sure that the short version had [Russian Defence Minister Sergey] Shoygu," he said.

There is a different problem. Section 241 "On personal sanctions" of the law dated 2 August requires the compilation of a list with detailed information on the financial standing of every person: sources of income, list of relatives, list of assets in the USA, etc.

"The main problem caused as a result of interference by State Department officials is that this part of the document was classified. The Treasury secretary noted yesterday that it contains hundreds of pages. First, their publication would cause a political explosion in Russia because there would be not just general statements about a 'stolen trillion' but detailed information about this money. Second, if this data was openly published, no additional sanctions would be needed anymore since it would contain information on money laundering on a very large scale. In that case, the USA would just need to apply its existing legislation on combating money laundering to people on the list. Now, because the Trump administration has classified this information, the published report does not automatically trigger the application of US laws. For implications to take place, the second step is required, that is the introduction of sanctions," the expert explained.

However, he said that the Congress would sooner or later introduce sanctions against many people from the list, so Moscow's jubilation is premature. "Moreover, the capitalization of assets of all the people on the list is now plummeting," he added. 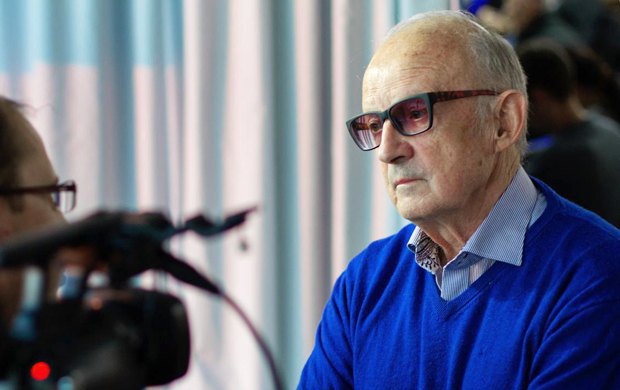 An analyst, one of the founders and head of the Podryvateli project about post-Soviet kleptocracy, Ilya Zaslavskiy, is of the same opinion.

"I consider it a very positive development that the Americans finally broadly labelled 210 people, and in addition to public officials and the Lake [a dacha housing cooperative associated with Vladimir Putin's inner circle], they named many 'second-tier' people'. It is very important that almost all key 'system liberals' are here: Shuvalov, Dvorkovich, Belousov, Gref. It was amazing that they included Fedotov and Titov, this is a pleasant surprise. It is also encouraging that there are many more oligarchs than anyone thought at the beginning, in particular, not only the entire Alfa Group and Vekselberg, but even Baturin and Rybolovlev, who live abroad! A huge omission from the list is the absence of the deputy head of the Central Bank and member of the Tagan organized criminal ring, Aleksandr Torshin. Chubays, Nabiullina, Ernst, Dobrodeyev, Simonyan and other propagandists are not there either," Ilya summed up in a commentary for LB.ua.

"The list will go to the Congress, and a law on new sanctions will be adopted on the basis of this document," a Russian opposition figure and close associate of murdered politician Boris Nemtsov, Leonid Martynyuk, is confident.

"The Russian elite is 'toxic' and financial institutions in the USA and Europe will treat persons on the list as dangerous and uncomfortable clients," he suggested.

According to Martynyuk, the main goal of the report is not to topple the regime or Putin, but to contain Russia. "The regime must be weakened to such an extent that it does not pose a threat to neighbouring countries, European states and the United States. Putin should have no money to fight in Ukraine or Syria. And he should be afraid to hack the websites of American politicians and institutions next time," Martynyuk told LB.ua.

A former CIA employee with more than 30 years of experience, Christopher Bergers (?), concurs. 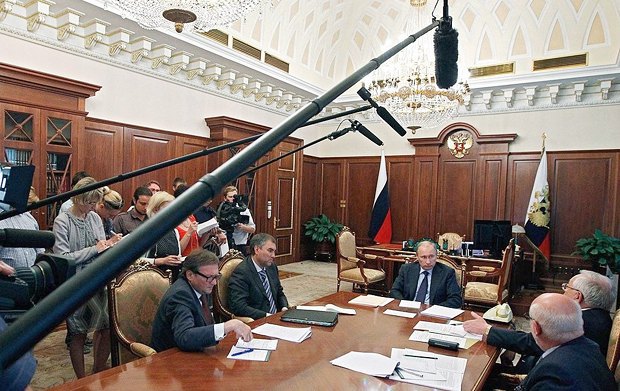 Photo: kremlin.ru
(From left to right) Boris Titov, Vyacheslav Volodin, Vladimir Putin, Vladimir Lukin and Mikhail Fedotov during a meeting in the Kremlin.

"This list is an attempt to identify the most influential political figures, oligarchs and officials. It's funny, but Putin himself is not included in this list. However, a 'classified annex', no doubt, contains detailed information about why each person made it to this report. Yes, so far no sanctions have been mentioned, but the list was drawn up at the request of the Congress and handed over to it for processing. This is a kind of 'shopping list', a 'crib' for imposing sanctions or other actions, " he explains to LB.ua.

Former US State Department official Alexei Sobchenko is even more optimistic. "Making this list is only the first step. In any case, the persons indicated in it will begin to have problems. But the main thing is that this step can really usher in a collapse of the Putin regime. At one time, I was surprised at the impact the Magnitsky list had on the Russian bigwigs, although there were only 11 people, including nurses. Nevertheless, this list caused panic in Russia because for these people there is nothing more terrible than to be cut off from the West and its benefits," he is confident.

"Unlike the communist ideology which, despite being utopian, was attractive to some people in the West, modern Russia cannot offer anything to the world at all. Therefore, the main value for the current Russian bureaucracy is the opportunity to own real estate abroad, buy expensive things there to brag about them to their colleagues, send children to study abroad, and so on. There is nothing more to most of them. All their talks about the Orthodoxy, patriotism and the "glorious Russian history" are just fluff. Therefore, there is nothing more terrible for the Russian elites than to be cut off from the West. Their reaction to the Magnitsky list clearly showed: any expansion of such lists means an end to the regime.

Yes, the "Kremlin list" does not say anything about the freezing of bank accounts or the confiscation of assets. But, first, it can be said in the future. Second, based on the existing list alone, these people can be refused visas - both US and Schengen. This is especially important considering that for these people travelling abroad is not just a pleasure, but a way to confirm the status that they are now losing," the former State Department official said. 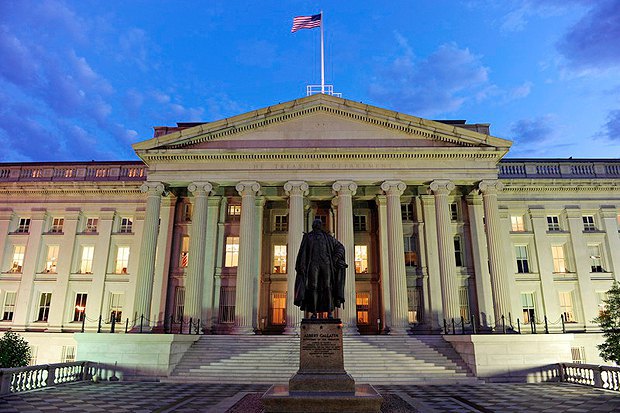 Alexei Sobchenko recalls the words of the State Department's Coordinator for Sanctions Policy, Dan Fried, that the main goal of the measures being taken is not to punish Russia, but to make it change its policy. "Some people are not included in the list, but they can be included there in the future since the list is open. Thus, a message is sent to people who are not mentioned in the report that the only way to avoid inclusion is to end all games with the Kremlin, including funding for Putin's election campaign. Therefore, long before a real punishment is introduced, there will be a split between the elites that were included and not included in the list. Those on the list will insist on a 'hard line' against the West, while those not mentioned in it will be eager to make sure the policy gets changed, which will seriously tilt the balance within the existing bureaucracy," Sobchenko forecasts.