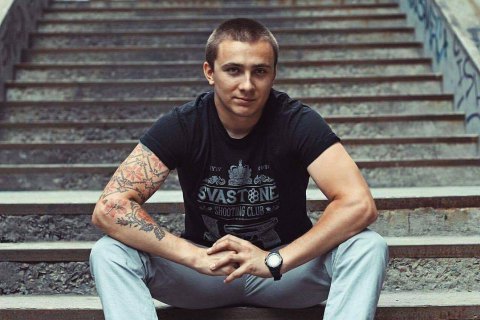 A former Odesa leader of the far-right group Right Sector, Serhiy Sternenko, was attacked by two men armed with cold steel late on 24 May, according to his own account.

He managed to fatally stab one attacker in the stomach while the other one ran away.

According to police, Sternenko was left with concussion and cut to his arm.

According to the local news website Dumskaya, Sternenko admitted that he had used his own knife. His girlfriend was quoted as saying that he made the attackers retreat, chased one of them and stabbed him.

The local news website Timer, sympathetic of separatists, said that the victim served in the 25th aeromobile brigade of the Ukrainian Armed Forces and that police did not find any weapon he could use to attack Sternenko.

It is not the first time Sternenko gets attacked in Odesa. On 1 May, he was shot in the neck from behind from a rubber-bullet gun. The previous attack on him happened in February.

Sternenko is a well-known public activist in Odesa who took part in protests against the urban development of park areas in Odesa.

In 2017, police detained him on suspicion of drug dealing. This called massive protests and he was bailed out by the Odesa regional state administration head.