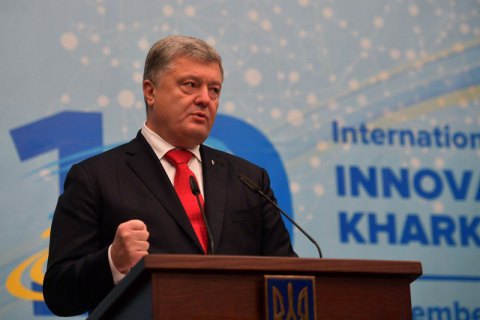 President Petro Poroshenko has ruled out the use of force to restore control over the occupied territories of Donbas.

He was speaking at the opening of the economic forum “Innovations. Investment. Kharkiv initiatives” in Kharkiv, commenting on a recent opinion poll by the leading pollsters.

“They asked about the best strategy to bring back Donbas and restore Ukrainian sovereignty in Donbas: 11.5% spoke in favour of an urgent military offensive with the use of artillery, rockets, multiple rocket launch systems and aviation… They wanted to return Donbas by force only,” he said.

Poroshenko said this option was unacceptable because not everyone in Donbas is an enemy.

“We don’t need Putin’s scenario. Ukraine is not Russia. We belong to a different civilization where we value human life,” he said.

He also criticized the options “to leave everyone as is” or isolate Donbas “with barbwire and forget about it for some time”.

He said most Ukrainians support a political and diplomatic settlement only.