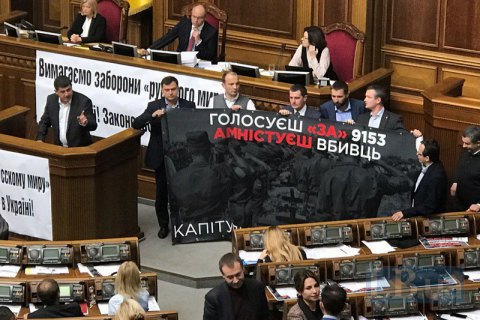 Parliament has extended the law “On special regulations on local self-government in certain areas of Donetsk and Luhansk regions” until 31 December 2019.

The factions of Self-Reliance, the Radical Party and Fatherland voted against the bill nearly in full.

The special status will not take effect until Russia withdraws its troops.

“The bill is of purely technical nature. We are not voting for the core of the law which we passed in September 2014 and March 2015. What is more, this law cannot take effect until the Russian army, Russian mercenaries, Russian troops get out of Donbas, until an international ‘blue helmet’ mission is deployed there,” first deputy speaker Iryna Herashchenko said.

She expects the bill to strengthen Ukrainian diplomats’ position at the Donbas talks, solidify the international coalition and leave no reason to accuse Ukraine of disrupting local self-government.

Ukraine first passed the law on special regulations for Donbas in autumn 2014 and introduced amendments to it in spring 2015. The changes kept it from taking effect because it says that the clauses on the special status of Donbas will only take effect after democratic elections are held in the militant-held areas and mercenaries are withdrawn. The law was limited to three years.