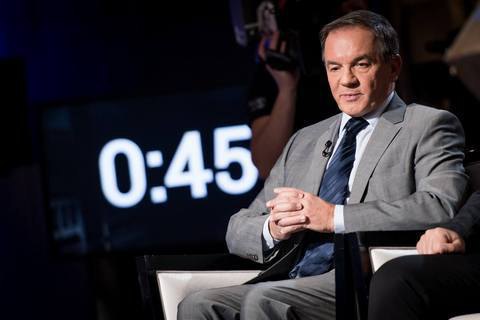 Michel Terestchenko, mayor of Hlukhiv, Sumy Region, has announced his decision to step down as the mayor and run for the president of Ukraine.

"The resignation of the local head does not mean surrender, but my challenge to the system for the next steps to fulfil the obligations undertaken to the residents of Hlukhiv," Tereshchenko said at a press conference in the press centre of the Interfax-Ukraine agency on Monday.

According to him, once in five years, Ukraine has the opportunity to change the country in a peaceful manner.

Terestchenko noted that among the current presidential candidates he does not see anyone who has the political will to change the country and fight corruption. "Therefore, I am forced to run for the office of president of Ukraine," he explained.

In addition, Terestchenko suggested creating an anti-oligarchic platform with the involvement of public organizations to form a team of professional statesmen.

In his opinion, state power does not want to change and imitates reforms. "It's impossible to change the system at the level of a small town," Terestchenko said.

He also noted that the political forces represented in the local councils do not promote reforms on the ground, but, on the contrary, hamper effective work.

As an example of obstruction of activities, Terestchenko cited facts about the insignificant financing of the town from the state budget, sabotage of taking necessary decisions in the town council and the lack of adequate response by law enforcement agencies to violations of the law.

In this regard, he noted that there is no sense to remain in the office further, since there is no possibility to influence the processes in the town and to demonstrate the results.