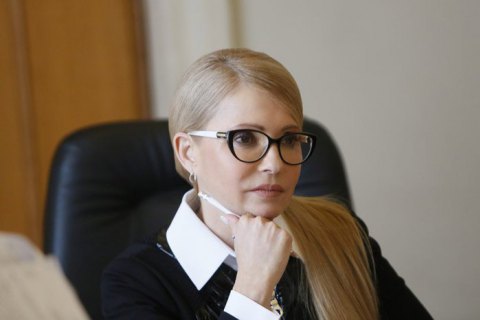 The leader of the parliamentary faction Fatherland, Yuliya Tymoshenko, has followed up on her earlier statement that the national oil and gas company Naftogaz Ukrayiny should be liquidated if she is elected president. She said that as a legal entity, the company would be liquidated after Russia, as the aggressor state, pays all its debts as mandated by the Stockholm arbitration.

“Once I said that Naftogaz should be liquidated as an intermediary in the natural gas market, the presidential administration immediately produced the instructions to media that I was allegedly implementing a Russian programme, that is to liquidate Naftogaz and kill a chance to claim the money owed by the aggressor state. “Naftogaz, as a legal entity, not an intermediary in the gas market, will operate until Russia pays the last kopeck it owes,” she said.

However, once it is liquidated, Ukrainians will receive gas directly from the state-owned company Ukrhazdobycha, which, she says, will prevent corruption and lower the tariffs at least by half.

“This is an absolutely profitable gas price for our gas industry,” she said.

She said that it was thanks to the gas contracts, which she once signed and which the authorities deem to be “bad”, Ukraine could win the case against Russia in Stockholm.