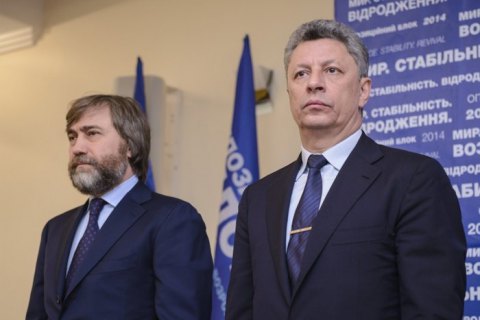 The Opposition Bloc will hold a political council meeting on 12 November to discuss the alliance struck by its Yuriy Boyko and Serhiy Lyovochkin with Viktor Medvedchuk's pro-Russian For Life party.

"The signing of a certain agreement on the creation of Opposition Platform in parliament today is a private initiative of Yuriy Boyko and Serhiy Lyovochkin. As soon as on Monday we are initiating a meeting of the political council of the Opposition Bloc to discuss the situation," Opposition Bloc MP Vadym Novinskyy said.

He added Opposition Bloc would demand a party congress.

"To allow the party's rank and file to assess the situation and make a decision on the matter," he added.

"It appears Messrs Boyko and Lyovochkin decided to join the For Life party if they have such initiatives. Our party has always been in favour of a single presidential candidate from the progressive opposition forces capable of putting up real competition to the incumbent authorities instead of playing to the tune of Petro Poroshenko," he said.

On 9 November, a group of Opposition Bloc MPs (the so-called "Boyko-Lyovochkin wing") decided to strike an alliance with the For Life party, whose actual leader is pro-Russian politician Viktor Medvedchuk.

The Opposition Bloc was set up on the debris of Viktor Yanukovych's Party of Regions in 2014 for the sole purpose of entering parliament. The Opposition Bloc, which received 9.43%, has two major shareholders – the groups of Rinat Akhmetov and Dmytro Firtash who split influence in half. The faction's co-chairmen are Oleksandr Vilkul and Yuriy Boyko, representing both groups respectively.

Read more about the story in "Three men in a boat and Akhmetov overboard".