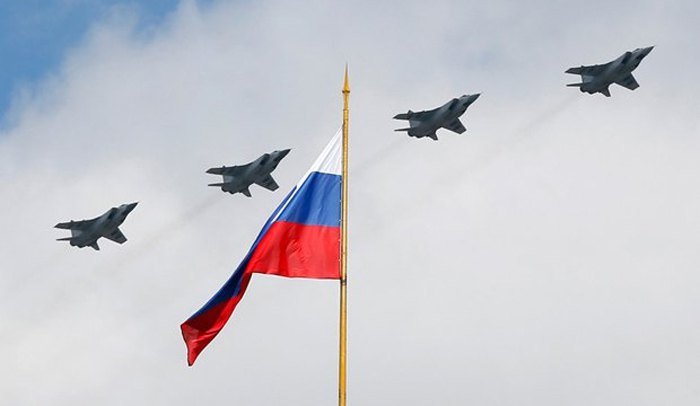 Italy and Italians are in thrall to myths about Russia which are very far from reality and harmful. This was a subject of discussion at a conference in the Italian parliament with the participation of leading experts, who offered to look at the facts.

"Russia in Italian discourse: the search for the lost sobriety of look". The conference’s organizers, the Mondodem political laboratory of the Italian Democratic Party, could hardly come up with a more eloquent name.

There has indeed been a lot of Russia in the Italian discourse of recent months since the appointment of the Di Maio-Mateo Salvini government. Members of the government made a point about its special place and their special attitude to it once they came to power. At the time, they said that despite the fact that they are the "government of change, they will not change the foreign policy of Italy. With one exception - their attitude towards Russia.

Well, to distorted Russia, we should add. In fact, to Russia full of myths, not facts about it.

Conference participants - political scientists, journalists, independent researchers - noted several times that for the current Italian government, Russia is not so much a real state with which it is necessary to somehow build relations, but a symbol of anti-Europeanism, a symbol of resistance to "those Brussels bureaucrats". 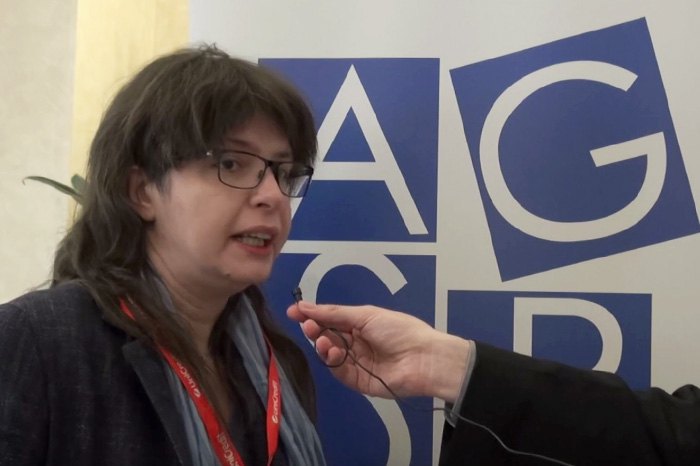 For instance, La Stampa journalist Anna Zafesova noted that in the view of both the government and a large number of ordinary Italians, Russia is a great economic and military power. But if you look closely at the facts and not at the image created by the media, you will see a state with a huge mentioned several recent notable facts. For example, about the sinking of a floating dock after the Admiral Kuznetsov aircraft carrier slid out of it. The dock was lost precisely because of infrastructure problems, due to numerous blackouts. And since the dock was made in Sweden, Russia can hardly expect Sweden or another North European country to build it another one.

Contrary to the Italian idea of "super-rich Russians", Russia is beset with profound economic problems. Unlike in recent years, even the Russian Finance Ministry does not demonstrate optimism: it does not see any ground for the ruble to strengthen. In addition, the price of oil should soon return to 50 dollars per barrel, which is completely insufficient for the Russian budget. After all, Russia is a country that lives almost entirely off its natural resources, a kind of "snow-covered emirate", Zafesova quoted her colleagues as saying. In addition to all this, there is a dozen packages of various sanctions over foreign aggression.

In social care, Putin’s rating plunged by 15% at once as a result of the sad pension reform, which practically guarantees that 40% of men simply will not make it to retirement.

Not to mention the so-called "problem of 2024", which is, "what will happen after Putin?" Will Russia succeed in reforming this ultra-personalized system of power?

So, the invincibility of Russia is only a well-replicated myth, Anna Zafesova concludes. 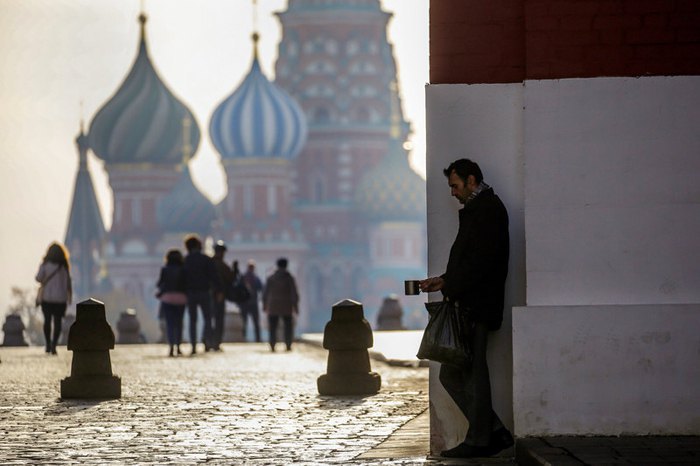 Another problem which is "not a fashionable" matter for discussion is a so-called "value gap". Both Anna Zafesova and Nonna Mikhelidze from the Institute of International Affairs (Rome) touched upon this phenomenon in their speeches.

First, the West and Russia have fundamentally different ways of thinking: Russia does not accept or understand Western liberalism. The freedom of citizens, human rights are not for the Kremlin. In Russia, a person exists for the state, not a state for people.

The second stumbling block is how they see the international chessboard. Russia insists there is its own "zone of influence" where it can do what it wants with impunity, which includes all the states formed after the collapse of the USSR. Nonna Mikhelidze notes that while not offering Ukraine, Georgia and Moldova full membership of its structures, the West considers it necessary and appropriate to strengthen political and economic ties with these countries and pull them closer to Western management standards. Russia, on the other hand, perceives this policy as an attack on "its own legitimate interests". It continues to insist that it should be entitled to a kind of veto on the post-Soviet countries' accession to NATO. There is not a single effective model for solving this conflict of values, the researcher said.

Of course, speaking about the values, the participants in the discussion could not ignore the issue of sanctions against Russia, especially since the current Italian government is so fond of declaring its intention to cancel them immediately. The sanctions are a manifestation of the difference in values between the West and Russia. Conference participants expressed different opinions about their effectiveness, ranging from "it seems they do not work, the conflict has not been settled" to "this is the only way to prevent an even wider war in Europe, the only thing that is holding back Putin from further adventures is that he has to reckon with sanctions". 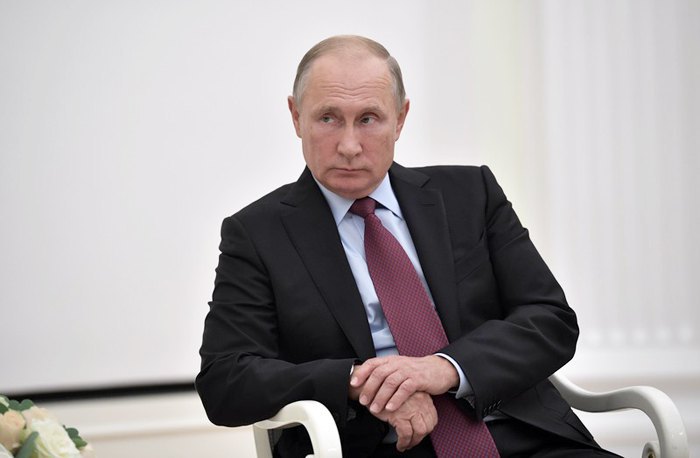 There was a separate discussion on the myth of losses incurred by Italy because of anti-Russian sanctions. Unfortunately, Russian propaganda was effective here, according to the head of the Italian editorial office of Stopfake, Mauro Voerzio, as most Italians believe that it was Brussels, not Moscow, which created problems for Italian manufacturers and suppliers of agricultural products. Loss estimates are quite different because the collapse of the ruble has greatly affected the purchasing power of Russians.

However, it is not about the numbers at all, Voerzio stressed. "We cannot count - it costs us 100 million or 300 million. I often go to the front in eastern Ukraine. There is war, people are dying there. Sanctions are the only possible tool, the only alternative to a military response. If you cancel them, 'alpha male' Putin will step up aggression. Dialogue with an 'alpha male' can only happen if you show your teeth. If you put your tail between the legs, the alpha male will have you on your back," he said.

Conte as a figurine

Could Russia really become an alternative partner for Italy, as its the current government puts it? Alessandro Alfieri, chairman of the Democratic Party’s Committee on International Politics in the Senate, raised this question in his speech.

Salvini's government is trying to promote an opinion that the country's Euro-Atlantic position can be changed to "Eastern", that is Russian. And this narrative is used not because, for example, Salvini considers this idea realistic but because it works: the electorate of the ruling parties responds to it really well. Although, of course, if you take the facts (Russia's GDP, combat capability, population, which is incomparable with the population of the EU, the USA or China), it is clear that Russia cannot replace Italy's traditional partners in finance, security or any other dimension. 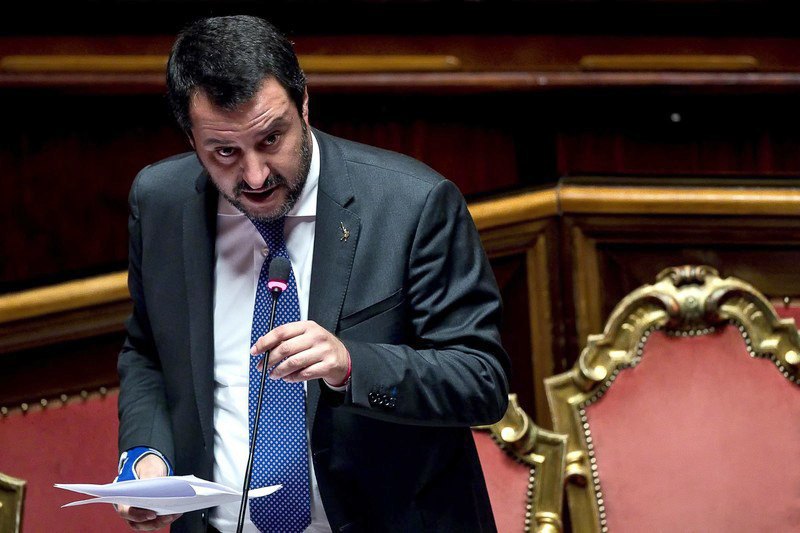 The Di Maio-Salvini government is known for its consistent and chaotic actions. Yes, their statements are very pro-Russian. One may recall how Salvini said in Moscow that he felt more at home there than in some European countries. Italian officials visit Russia extremely often. Therefore some people in the EU see the Apennine state the Kremlin's "Trojan horse" of sorts which can try to destroy the EU from the inside.

But at the same time, in practice, the "yellow-greens" have not taken any specific pro-Russian steps. As far as its foreign policy is concerned, Italy continues to follow the same course, aligning, for example, with an escalation of sanctions against Russia. According to experts, such a fuzzy foreign policy position - when one course is announced and another is being implemented - is very detrimental to the reputation of Italy in the international arena.

Italy is becoming incomprehensible, the trust in it is waning, the leader of the Democratic Party on the Committee on Foreign and European Affairs in the lower house of parliament, Lia Quartapelle, said. Moreover, the government in its endless attempt to please Russia does not defend the interests of Italy at all. It aligns with the Russian position to such an extent that it forgets about the Italian position. The MP called this behaviour of officials slave nationalism. 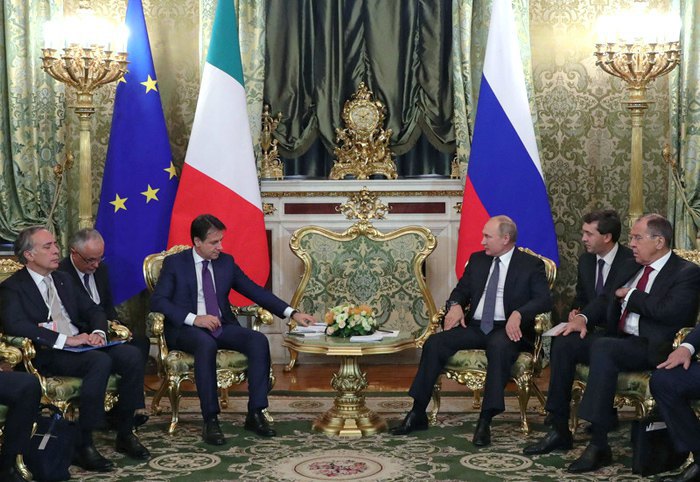 Photo: EPA/UPG
Vladimir Putin (centre right) and Giuseppe Conte (to his left) during a meeting of delegations in the Kremlin, Russia, 24 October 2018

For example, Putin announced at a recent news conference that he would aim his missiles at NATO countries if there were US medium-range missiles there. Giuseppe Conte, the head of government of one of NATO countries, was sitting next to him and did not say a word in response to the threat to Italians. He "works as a figurine on the tsar's table" (this is how the MP commented on the event in social networks).

Given its age-old good relations with Russia, Italy could become an intermediary between Moscow and the West, try and convince the Kremlin to find a replacement for the ineffective Minsk agreements, develop a mechanism for monitoring the implementation of agreements. However, with the current government it is not worth hoping for.