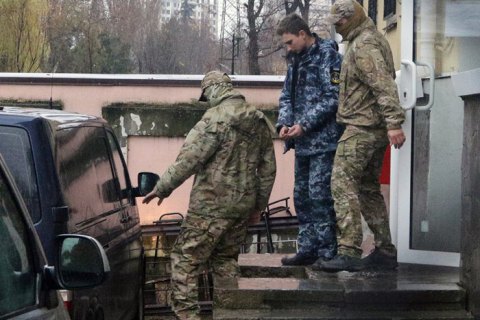 The Ukrainian Navy sailors captured by the Russian Federal Security Service (FSB) have the status of prisoners of war (POWs), according to Gyunduz Mamedov, Ukraine's chief prosecutor for the Autonomous Republic of Crimea, the territory illegally annexed by Russia in 2014.

According to the official, Russia is obliged to comply with the relevant norms of international humanitarian law when dealing with Ukrainian sailors. The Third Geneva Convention describes in detail the procedure for the treatment of POWs.

“Captivity is not a form of punishment. It is applied to combatants in order to prevent their further participation in an armed conflict by temporarily imprisoning them,” the prosecutor said.

Thus, prisoners of war cannot be charged simply based on their participation in an armed conflict. Also, Russia had to inform Ukraine and the International Committee of the Red Cross about all actions committed in relation to the Ukrainian sailors as POWs and allow ICRC representatives to visit them.“Prisoners of war remain military servicemen, and the invader state must respect their honour and dignity. They are allowed to sport military insignia and maintain their rank. The killing, inhuman treatment of prisoners of war, any moral or physical pressure on POWs to force them into pleading guilty of crimes they are accused of are serious violations of international humanitarian law. In addition, seriously ill and wounded prisoners of war are subject to return to their own or neutral state,” Mamedov said.“Is the invader state aware of this? They certainly are. Are they treating our sailors as prisoners of war? Judging by our data, they are not,” the prosecutor said.

According to Mamedov, the actions of the invader state aimed at bringing the Ukrainian POW sailors to criminal responsibility for a crime they did not commit (namely, “the illegal crossing the state border of the Russian Federation”) deprive them of their right to fair and impartial trial. This is a serious violation of laws and customs of war under Article 130 of the Third Geneva Convention.

On 25 November, Russia fired on and captured three Ukrainian naval vassals off the Kerch Strait, wounding at least three servicemen.