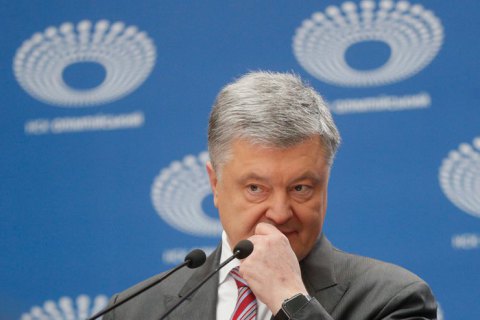 President Petro Poroshenko has called the ruling of Kyiv's District Administrative Court on Privatbank the first sign of revenge. According to him, if Volodymyr Zelenskyy is elected president, it will only get worse.

"For five years, Putin has not achieved a single strategic goal in Ukraine. He tried to attack from the front and undermine from the rear - he did not succeed. He is eager for revenge, he did not abandon plans to destroy Ukraine, deprive us of independence and blur our national identity," Poroshenko said in his address to the people on 18 April.

In his opinion, Putin hopes to get an incompetent newcomer, "whom he can easily outplay", as president of Ukraine.

Poroshenko considers himself a leader who is able to resist Putin.

"My opponent’s programme does not contain a word about the European Union, so it does not surprise me that Moscow is campaigning for him - from Zhirinovsky and Zyuganov to our emigres led by Azarov, who have already packed their suitcases to return to Ukraine. Like a group of fugitive oligarchs. If Zelenskyy wins, one of them will reclaim Privatbank. And as you can see, they cannot wait, they have already begun to carry out this plan," he said.

In his opinion, vetting and electronic declaration of income statements are to be cancelled soon.

"The revenge will not be a sharp U-turn. At first, it will be an unobtrusive, creeping but sure return to the sphere of Russian influence," Poroshenko said.

The president said that he would accept any result of the election on 21 April and begged Ukrainians' pardon for the mistakes he made.

"When you come to the polls, do not think about Zelenskyy or Poroshenko. Think about Ukraine, how to keep it. Just as in 2014 you stopped Novorossia, now I ask you not to allow Ukraine to turn into Malorossia [Little Russia]," Poroshenko said.