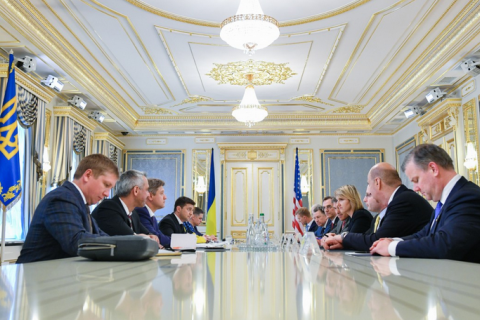 New Ukrainian President Volodymyr Zelenskyy has met representatives of the US Administration and US Congress who arrived in Kyiv to take part in the official ceremony of inauguration of the head of state.

Zelenskyy thanked the USA for its leadership in restoring the sovereignty and territorial integrity of Ukraine, as well as for assistance in promoting reforms, according to the president's website.

He also thanked the USA for security assistance.

The president added that he was ready to implement transparent, open and democratic reforms in Ukraine: "We have a very good example of your country. Reforming Ukraine as a whole, in all areas, will not be held after the ceasefire in Donbas, but in parallel. Because we need it. We want to become a European country in terms of values and transparency".

On behalf of the US Administration, the meeting was attended by the members of the presidential delegation headed by US Secretary of Energy Rick Perry, US Special Representative for Ukraine Kurt Volker and US Senator Ron Johnson.