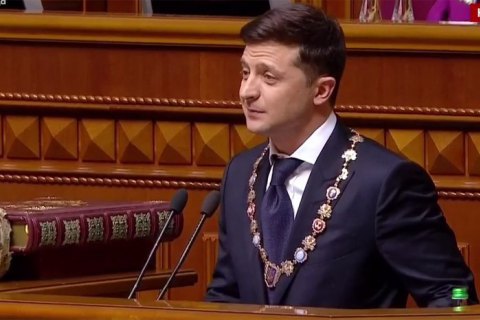 President of Ukraine Volodymyr Zelenskyy has announced the dissolution of parliament of the eighth convocation. He made this statement during the inaugural speech in parliament in Kyiv on 20 May.

He called on MPs to adopt the laws on the abolition of parliamentary immunity, criminal liability for illegal enrichment and the Electoral Code in two months before the early elections, providing for open lists.

He also asked parliament to dismiss the heads of the Security Service of Ukraine, the Prosecutor-General's Office and the Defence Ministry.

"You will have two months to do this. Do it. Claim all the medals for yourself. Those are pretty good points for the early parliamentary elections. I am dissolving the Supreme Council of the eighth convocation," Zelenskyy said.

He also urged the government to step down.

"You can take a sheet of paper, a pen and step aside for those who think about the next generations, not about the next elections. Do it. And people will appreciate that," he said.