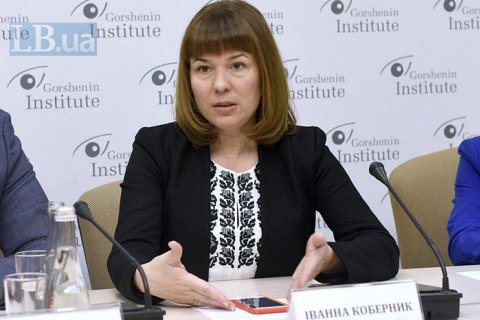 Early programming in schools could not be introduced without proper teacher training, infrastructure improvement and the development of appropriate curricula and teaching guidelines, an adviser to the minister of education and science of Ukraine, Ivanna Kobernik , has said.

"When we talk about the introduction of any courses or programmes in school, we have to talk about real opportunities. In the case of early programming, it concerns the availability of computers and school access to the Internet. In reality, 400 Ukrainian schools have no computers at all which could be used in the educational process. In half of Ukrainian schools the Internet connection is slower than 10 Mbit/s, which prevents educational content from being used effectively," Kobernik said at a roundtable on early coding in school, which was hosted and organised by Gorshenin Institute.

She stressed that the introduction of early programming in schools would require requisite infrastructure and, most importantly, trained teachers. "The new state standard of primary school, which is being introduced as part of the New Ukrainian School (NUS) reform, gives enough flexibility to develop programming skills, but you need to understand exactly how to organize the classes best - as a separate subject of the variable component or within the invariant part of the curriculum - for example, during the Technology or "I research the world" classes," Kobernik said.

At the same time, she added, modern schools should definitely teach children the competencies that they will require to build a successful future, which is the target of the NUS reform.

Kobernik also said that teachers had for years been discussing how to reform IT education: "There are two points of view: early programming is necessary and this is a requirement of time, while the second point of view is that not all children are supposed to code and that this may give rise to additional complexes, however everyone needs to learn how to use computer technologies, this is the so-called user approach. There are more of those who consider programming an important part of the school curriculum, but it is also important to develop modern teaching guidelines. Civilised cooperation between the government and innovative business would be useful in this regard."

Modern children, according to Kobernik, are often ahead of adults in terms of digital literacy and the speed of acquiring new skills. Therefore, the introduction of programming basics can motivate children to take a great interest in the educational process.

The 2019 budget has 1bn hryvnyas booked for providing schools with computers and Internet. Of this amount, 700m hryvnyas is expected to be used on Internet access and 300m hryvnyas on the purchase of computers.

"This money has been transferred to the regions for the local authorities to make the purchases. The procedure for the use of these funds provides that high-speed Internet will be primarily made available in cluster schools to which children from different rural locations are transported. And the remaining money will be used for other schools that do not have computers and the Internet. The essence of the programme is to reach as many children as possible," Kobernik said.