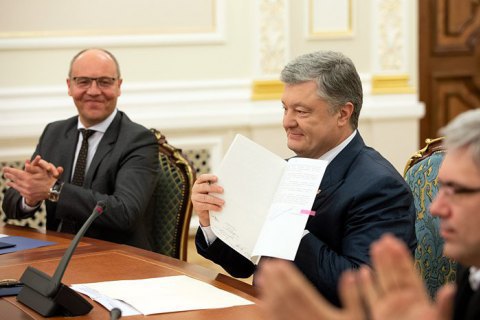 President Petro Poroshenko has signed the bill "On ensuring the functioning of the Ukrainian language as the state one" into law.

“Today, on this historic day, I am deeply proud and highly honoured to sign this document,” Poroshenko said.

He stressed that this law united parliament despite fears to the contrary. According to Poroshenko, this law “unites the nation, the government and the opposition”, and only pro-Russian political forces opposed it.

He thanked speaker Andriy Parubiy "for his active efforts" to have the law adopted.

“I hope that the new authorities will also support it because this is a key statist position in the functioning of the Ukrainian state,” Poroshenko said.

"Language is the foundation on which the nation and the state are built. I emphasize that this law does not affect in any way any language of national minorities living in Ukraine. I am proud that over the past five years we have managed, without pressure or coercion, to ensure that this legal settlement does not infringe on anyone," he added.