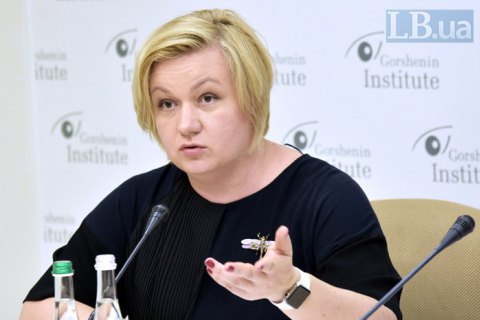 The concept of the New Ukrainian School (NUS) says the key skill for children is a competence, which includes the ability to use information and communication technologies, Oksana Makarenko, an adviser to the education and science minister of Ukraine and one of the NUS concept authors, has said at a roundtable at Gorshenin Institute.

"The only question is how to make it useful, without harming health, at a pace at which children can learn it according to their age. If we are talking about early coding, sanitary regulations for young children do not allow them to spend much time near computers - more than15 minutes is considered to be harmful to health. It is also worth considering the physical and psychological characteristics of development of 6-7-year-old children," she said.

However, according to her, this does not mean that primary school students cannot be trained to study coding.

"Early coding is not about losing one's head in gadgets. It is about developing logical thinking, the ability to divide a difficult task into small ones, build causal relationships and work as a team. We try to come up with exercises which could embed the above in the learning process," Makarenko said.

The expert noted that high school students study 22 subjects, so the philosophy of education reform is aimed at overcoming this profusion.

"It is necessary to teach children to work with information in a world where there is an excess of it in a different way. [We need to] highlight the core of knowledge without which it will be impossible for them to find their way in the processes and pass it through all the years at school. This includes such skills as critical thinking, logic, ability to work with complex problems. Coding may not be a separate subject, but the teacher of every subject can identify tasks that could develop coding skills - create a presentation, do research and later create a website," she said.

In her opinion, the main task of school education today is to teach children to think and use their knowledge.

"Children finish school being just overstuffed with knowledge. In the competitive world, they will not survive. It is no longer the case that someone on the assembly line will tell you how to work. Experts in the world market tell us that the list of professions will get updated by 30% to 50% in the next 5-10 years. In other words, our children will live in a world that we do not yet imagine. We need to prepare them for this new world by developing thinking skills and the ability to code is one of the key skills of modern people," Makarenko concluded.