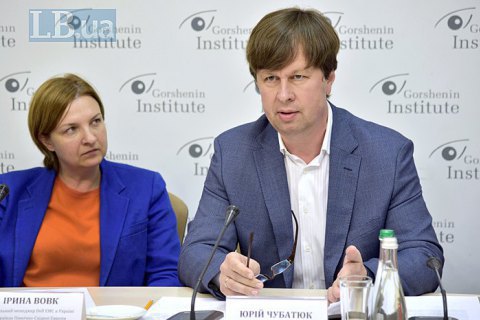 The introduction of early coding in schools will make children competitive while the ability to code will become one of the basic skills for successful employment regardless of profession, Yuriy Chubatyuk, president of the Everest group of companies, has suggested at a roundtable at Gorshenin Institute.

"We need to tell children the truth that apart from comprehensive development (which includes sports, music and command of a foreign language) the modern world requires them to master the basics of coding. There are many studies on the topic by respected institutions which say that in almost all areas - marketing, medicine, education, multimedia, manufacturing, retail, financial services and energy - the demand for specialists with basic coding skills will increase by 50%. We may not know which professions there will be in the future, but coding and ICT literacy form the basis of any of them," Chubatyuk said.

According to him, earlier coding in schools has already been introduced in 15 EU member states, as well as China, Singapore, South Korea, Australia, Canada, India and Israel. In the USA, 40% of schools offer this subject in the primary.

The expert is confident that there are no obstacles to the introduction of early coding in schools in Ukraine.

"They tell us to forget coding as there is no infrastructure in schools. I checked, according to Liliya Hrynevych (Minister of Education of Ukraine - Ed.), 413 schools in Ukraine do not have computers. This year, 300m hryvnyas was allocated for computerizing schools. I calculated, this is just enough for 413 schools. They say that there is no access to the Internet. That only 80% of schools have it, but it is supposedly slow. Having interviewed my colleagues in this area, I learned that it is possible to cover all rural schools with high-speed Internet for 200m hryvnyas. And the ministry wants to allocate 700m for this," he explained.

In addition, the expert noted that international experience shows that the study of coding in schools does not always require computers.

"There is a Finnish writer and programmer, Linda Liucas. She wrote a series of books called "Hello Ruby", which are very popular all over the world, they are about early coding classes without computers. The opinion that at early coding, children will write Basic scripts has long been far from reality. First, children will develop an interest in the subject," Chubatyuk concluded.