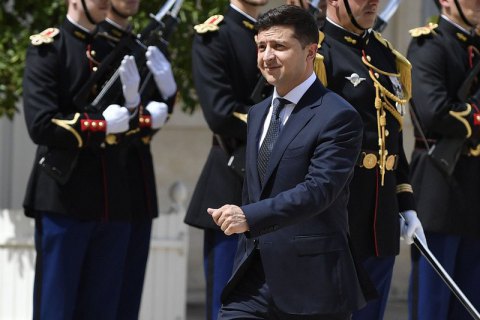 Ukraine is not ready for a dialogue with the separatists but it is ready to work in the Minsk format to establish peace in Donbas, Ukrainian President Volodymyr Zelenskyy has said at a joint briefing with French President Emmanuel Macron.

Zelenskyy was reacting to Macron's remarks about "negotiations with the separatists", according to Interfax-Ukraine.

"It seems to me that there has been a small mistake. We are not ready for a dialogue with the separatists. Exactly this because I heard the translation. We are ready to act in the Minsk format, continue relations in the Minsk format, stop shooting, I have repeatedly said this," Zelenskyy said.

For his part, the French president noted that he had not heard the translation and said that he welcomes Zelenskyy’s suggestions regarding the cease-fire that he made during the first days of his presidency, as well as gestures in respect of "the population living in separatist zones".

"I talked about the population that lives in the occupied territories," Macron said.

Zelensky visited Paris on 17 June on his first official visit as president of Ukraine. He made his first foreign working visit to Brussels shortly after his inauguration.