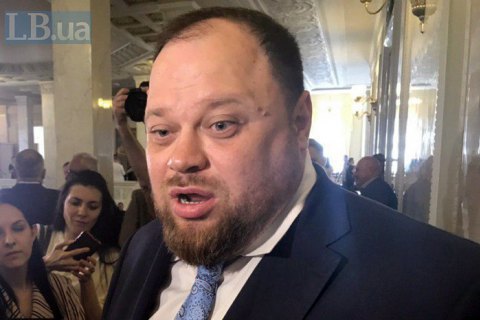 President Volodymyr Zelenskyy will consider convening an extraordinary parliament session to discuss the dismissal of Prosecutor-General Yuriy Lutsenko and appointment of Vadym Prystayko as foreign minister, the president's representative in parliament, Ruslan Stefanchuk, has told LB.ua.

"I will definitely talk with the president after his return to Ukraine regarding the idea of convening an extraordinary parliament meeting. I wrote down this proposal and think that tomorrow or the day after tomorrow we will discuss this issue and the possibility of convening such a meeting," he said.

Several MPs, in particular the head of the Self-Help (Self-Reliance) faction, Oleh Berezyuk, suggested holding an extraordinary parliament session on the initiative of the head of state to consider personnel issues on Wednesday afternoon.

At the agenda-setting council, Stefanchuk stressed that the president would insist on MPs considering the dismissal of the prosecutor-general and Foreign Minister Pavlo Klimkin and a further vote on the appointment of Prystayko as foreign minister.

Parliament speaker Andriy Parubiy said that should Zelenskyy come forward with this initiative, he will immediately sign an instruction to hold an extraordinary session.

Zelenskyy is on an official visit to Berlin today. Tomorrow he will take part in a meeting of the trilateral contact group on Donbas in Minsk.