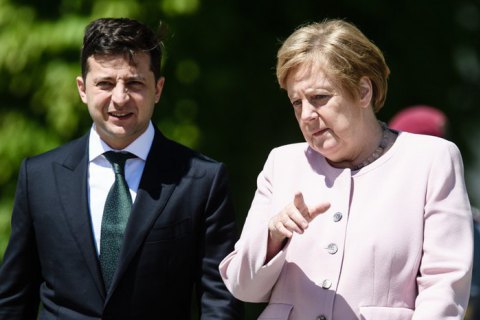 The first working meeting in the Normandy Four format comprising Germany, France, Russia and Ukraine is scheduled for July, President Volodymyr Zelenskyy has said at a joint press conference with German Chancellor Angela Merkel, according to Ukrainian News.

"We discussed it that it [Normandy Four meeting] should be held after the parliamentary elections in Ukraine. Yesterday in France I talked about this with Mr. President Macron. But I really want this meeting to take place immediately. Therefore, the first working meeting is scheduled for as soon as in July," Zelenskyy said.

This meeting will focus on preparations for a summit of the heads of state.

Earlier, Zelenskyy said in an interview with the German newspaper Bild that in case of a possible meeting with Putin, he would first of all raise the issue of Donbas and Crimea.

The last summit of the Normandy Four leaders took place in autumn 2016.

Former President Petro Poroshenko has repeatedly said that the problem of the Normandy Four format is not in its composition but in the Kremlin’s unwillingness to achieve a peaceful settlement.