President Volodymyr Zelenskyy has called on those who want sanctions on Russia to be lifted to visit occupied Donbas and annexed Crimea.

He said this at a joint news conference with German Chancellor Angela Merkel in Berlin, Ukrainian News has reported.

"I'm inviting those who are campaigning for lifting sanctions to visit Donbas and how much misery this war has brought to the Ukrainian people. Look at the Crimea which has turned from a tourist region and a natural gem into a true military camp,” the president said. 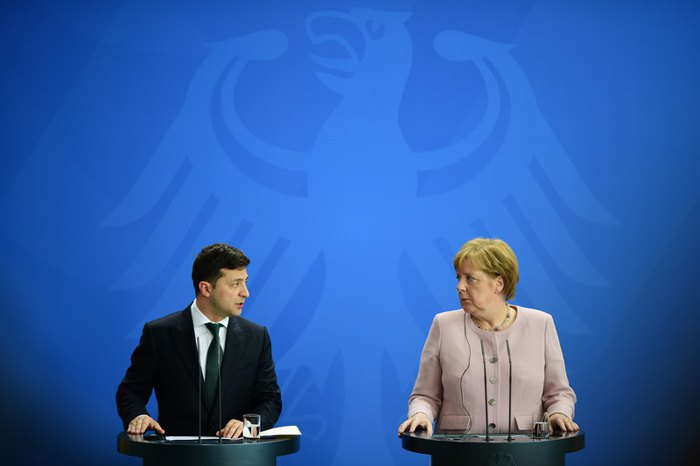 Zelensky said that the sanctions were "the only peaceful instrument" capable of ending the war.

"I know about calls by certain politicians and representatives of big business in Germany to lift the sanctions and resume business with Russia. I want to use this occasion to address them. We did not start this war, but every day we dream and fight for it to end. We do not want our European partners who have decided to help us to suffer from sanctions. But this is the only bloodless way to restore peace on the continent, and we must walk it to the very end," the president stressed.

He also said that during a meeting with Merkel he discussed the issues of achieving peace in the Donbas, securing the release of captured Ukrainian sailors and other Ukrainians illegally detained in Russian prisons.

Zelenskyy and Merkel also discussed cooperation between Ukraine and Germany in the UN and other international organizations, as well as the issue of bilateral trade and economic cooperation, Ukrainian reforms and the investment climate.

A number of German politicians have been campaigning recently for the lifting of sanctions on Russia.