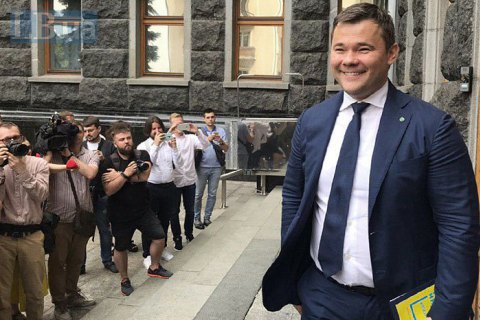 The Media for Conscious Choice movement has condemned the act of provocation by the president's office concerning the alleged resignation of its head Andriy Bohdan. It also warned representatives of the new authorities against deliberate disinformation directed against mass media.

"The authorities' preparedness to spread disinformation is a wake-up call to journalists to remember to thoroughly check statements and strictly control politicians' actions," the movement said in a statement published on the Detector Media website.

The media movement said that Bohdan's remarks that the authorities do not need journalists to talk to voters show that he is short-sighted and unaware of the role and function the media play in society.

"Representatives of the presidential office deliberately facilitated the distribution of fake news: they sent a copy of the resignation letter to several journalists at once and neither confirmed nor denied its authenticity for a day. Therefore, it was a deliberate act of provocation against the mass media. We consider it inadmissible when public servants and politicians deliberately spread fake information, thus undermining public trust in the media. The reaction of head of state Volodymyr Zelenskyy, who did not recognize their subordinates' actions as incorrect, cause particular concern," the statement reads.

"We consider it manipulative to contrast the direct communication between politicians and citizens through social networks and "indirect" communication through the media. Both are necessary components of the transparency of political activity. To control politicians, ask them questions, including inconvenient ones, and seek answers are among the main tasks of the media, while the authorities, for their part, must be open to the media," the statement reads.

The authors of the statement urged journalists to abandon non-public relations with politicians based on mutual services and switch to transparent cooperation and verification of facts, as well as strict observance of professional standards.

The Media for Conscious Choice movement was created in February 2019. It brings together leading Ukrainian media and civil society groups.