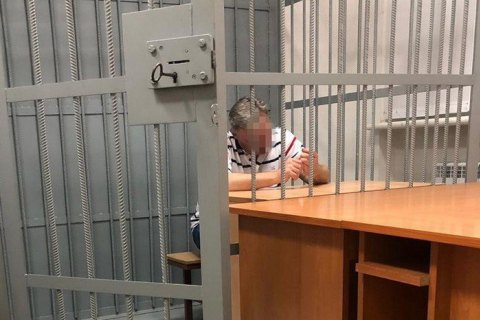 The National Antiсorruption Bureau of Ukraine (NABU) suspects Deputy Minister for Temporarily Occupied Territories Yuriy Hrymchak and his assistant Igor Ovidenko, whom it detained yesterday, of coming into possession of a large sum of money by deception.

The investigation established that a person representing one of the LLC told Hrymchak about the problem the solution of which falls within the competence of the judiciary, the NABU said. The firm needed advice on a civil case concerning the collection of debt from another private enterprise in its favour.

Hrymchak allegedly said that for a monetary reward of 100,000 US dollars, using his contacts, he could ensure the adoption of the necessary judicial decision. According to the official, he allegedly was to contact the deputy prosecutor-general so that the latter would influence the chairman of the Civil Court of Appeal (as part of the Supreme Court), who, in turn, could influence the judges of the same court.

During the negotiations, the parties agreed on 80,000 dollars.

Hrymchak and his assistant divided the first part of the agreed sum in the amount of 50,000 dollars between themselves. The remaining 30,000 dollars were transferred to them on 14 August.

During another conversation with Hrymchak, the representative of the LLC told him about a complex procedure of approving permits for construction in the areas in Kyiv which are considered cultural heritage sites. The deputy minister also offered his services here, valuing them at 1m dollars.

This money supposedly had to be distributed between the heads and officials of the Ministry of Culture, the Ministry of Justice, the Ukrainian State Institute of Cultural Heritage, the Kyiv city state administration and others.

On 14 August, Hrymchak and Ovidenko received 450,000 dollars for their alleged services.

NABU has not yet declared Hrymchak and Ovidenko suspects. According to NewsRoom , this will be done on the evening of 15 August.

According to the website, in order to conduct discreet investigative actions with regard to Hrymchak, the case was “fastened” to the proceedings on the assassination attempt on Tetyana Chornovil in 2014. It is being overseen by the Security Service of Ukraine directorate in Chernihiv Region.